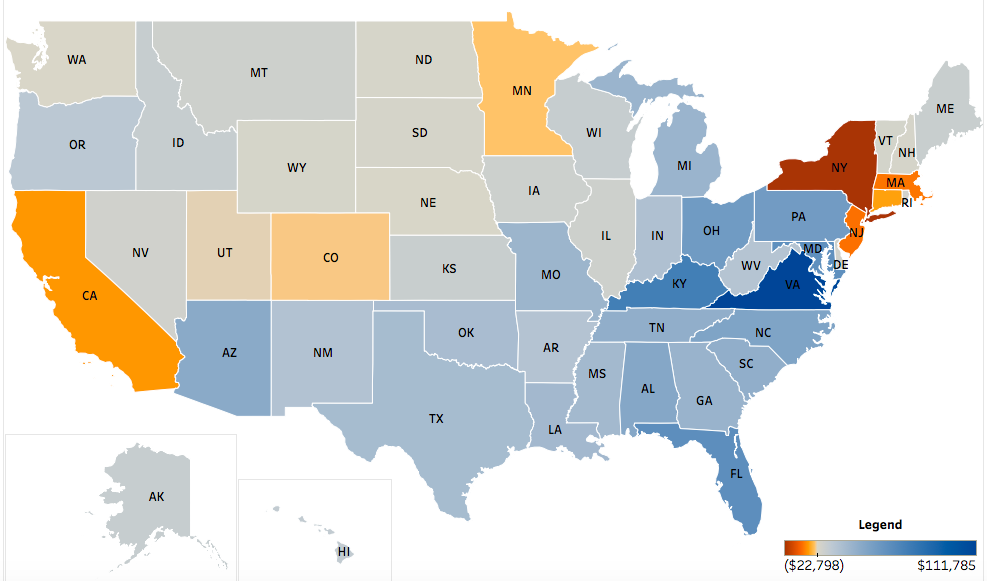 Connecticut is paying more per person to the federal government than it receives through direct payments, grants and wages than any other state in the country, according to an annual study produced by the Rockefeller Institute in New York.

Over the course of 2019, Connecticut residents sent the federal government $5.7 billion more in tax payments than it received back in the form of Social Security and Medicare payments, Medicaid and transportation grants and government contracts.

That amounts to $1,614 more going out of the state per person than coming back in federal funding.

Although Connecticut received higher than average federal payments per capita in all categories, the state’s payments to the federal government in the form of income, payroll, corporate and excise taxes outweighed the return.

Connecticut was 46 in the country in terms of the actual dollar balance of taxes paid compared to money received with New York, once again, have the highest imbalance of payments.

The imbalance is an occasional attack point for lawmakers at both the state and federal level, but it shows the redistributive nature of taxes in which the taxes paid by wealthier states like New York, New Jersey, Massachusetts and Connecticut are funneled to states like Florida, Kentucky and Virginia, which receive the most federal funds according to the report.

Florida, with its high concentration of retired individuals, paid $3,497 less per person in federal income taxes than Connecticut residents but received $1,250 more in direct payments, which is largely made up Social Security and Medicare.

Virginia paid $3,417 less in taxes per person than Connecticut but received $8,929 more per person in the form of federal contracts.

The discrepancy depends on a number of mitigating factors including how much residents in states are earning compared to the number of people receiving Medicaid payments and the number of corporate entities in a state that receive government contracts.

Massachusetts had the second-worst per capita showing in the country but received $175 more per person in federal funds than Connecticut, which equals roughly $630 million.

Much of that difference came in the form of federal grants meant so support Medicaid and other poverty-relief programs. Massachusetts received $103 per person more in federal grants than Connecticut, while New York received $967 more per person.

However, Connecticut’s imbalance of payments has been declining since 2015. The report shows Connecticut’s per capita loss decreased by more than $400 between 2015 and 2019 and the overall imbalance declined by nearly $2 billion.

But the change might not be due to Connecticut receiving more federal funding, but rather that Connecticut is sending less revenue to the federal government, according to a look at past reports by the Rockefeller Institute.

In their 2017 report, Rockefeller listed Connecticut’s per capita payments to the federal government through payroll, income, corporate and excise taxes at $15,643.

Conversely, New York and Massachusetts saw per capita tax payments to the federal government increase over the same time period by $583 and $492 respectively. New Jersey saw a decrease of $120.

One of the reasons for the increase in tax payments from states like New York and Massachusetts, according to the report, was the reconfiguring of the federal tax code in 2017 through the Federal Tax Cuts and Jobs Act, which capped deductions for state and local taxes.

According to the report, Connecticut’s per capita income tax payments to the federal government was declining by 2.3 percent on an annual basis before the SALT deduction cap bumped the payments back up by $534 per person.

However, the institute expects that next year’s report, which will look at 2020, will be in for a wild swing, as the federal government sent aid to states battling the COVID-19 pandemic and unemployment skyrocketed.

“All states will see larger balances of payments over the next two years,” the report states. “It is possible that in all states, Federal expenditures in states will exceed receipts.