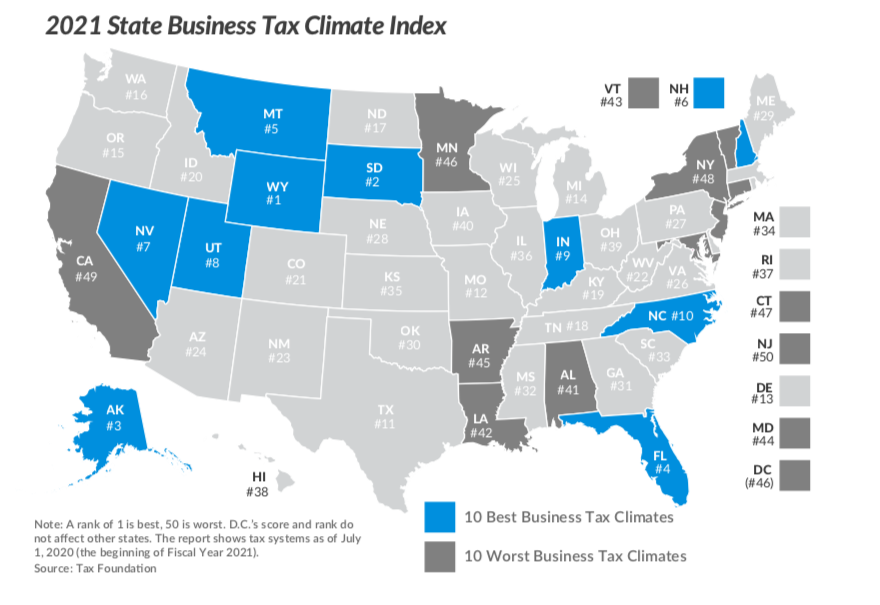 The Tax Foundation released its annual ranking of states based on their overall business tax climate and placed Connecticut 47th in the country, besting both New York and New Jersey but falling short of other Northeastern neighbors.

The rankings were based on personal income, sales, corporate, property and unemployment insurance taxes, which were weighted in that order. The scores are relative to other states and are based on state taxes as of July 1, 2020.

Connecticut scored roughly average for its corporate, sales and unemployment taxes, but very low for its personal income tax and dead last for property taxes.

Connecticut’s property tax collection per capita was $3,020, the third highest in the country behind New Hampshire and New Jersey.

Connecticut also scored poorly because it remains the only state in the nation with a gift tax which “heavily impacts individuals who have sole proprietorships, S corporations, and LLCs,” the study notes.

Tax Foundation authors Jared Walczak and Janelle Cammenga wrote that state income taxes are important because a “significant number of businesses” report their income as individual income taxes, and income taxes “reduce the quantity and quality of the labor pool.”

Although not mentioned in the report, Connecticut lawmakers in 2018 devised a complicated work-around to federal state and local tax deduction limitations imposed by President Donald Trump’s tax bill, which affected pass-through entities who report their business earnings as personal income.

Qualifying businesses would be taxed at the corporate rate and then receive a 93 percent credit back from the state. In 2019 Democrats voted to reduce the credit to 87 percent, essentially raising their tax burden and angering businesses owners and business associations.

“It is important to remember that even in our global economy, states’ stiffest competition often come from other states,” the authors wrote. “The Department of Labor reports that most mass job relocations are from one U.S. state to another rather to foreign location.”

Massachusetts ranked 34th in the country, and although it ranked worse than Connecticut for corporate taxes and unemployment insurance, the state ranked very high for its flat personal income tax and its sales tax.

Connecticut, which saw loss of General Electric, Alexion Pharmaceuticals and United Technologies’ headquarters to Massachusetts over the past ten years, ranked 22nd for corporate taxes.

Connecticut’s corporate tax surcharge was meant to sunset this year, but Gov. Ned Lamont has proposed retaining the $22 million tax in response to the COVID-19 pandemic that depleted tax revenue.

Florida, generally the largest beneficiary of Connecticut’s loss of individuals and families, ranked 4th on the list, boasting no income tax and very low corporate, property and unemployment taxes.

Some very wealthy and high-profile investors decamped to Florida from Connecticut, including Paul Tudor Jones, Thomas Peterffy and Barry Sternlicht, whose personal net worth was in the billions.

Connecticut lost a net $2.6 billion in adjusted gross income to other states in 2015 and $1.1 billion in 2017. $2.7 billion of the cumulative loss of those two years went to Florida, according to the Internal Revenue Service.

“Every tax law will in some way change a state’s competitive position relative to its immediate neighbors, its region, and even globally,” the authors wrote. “Ultimately, it will affect the state’s national standing as a place to live and to do business. Entrepreneurial states can take advantage of the tax increases of their neighbors to lure businesses out of high-tax states.”