Connecticut ranks 23rd on Moody’s “Back to Normal” index 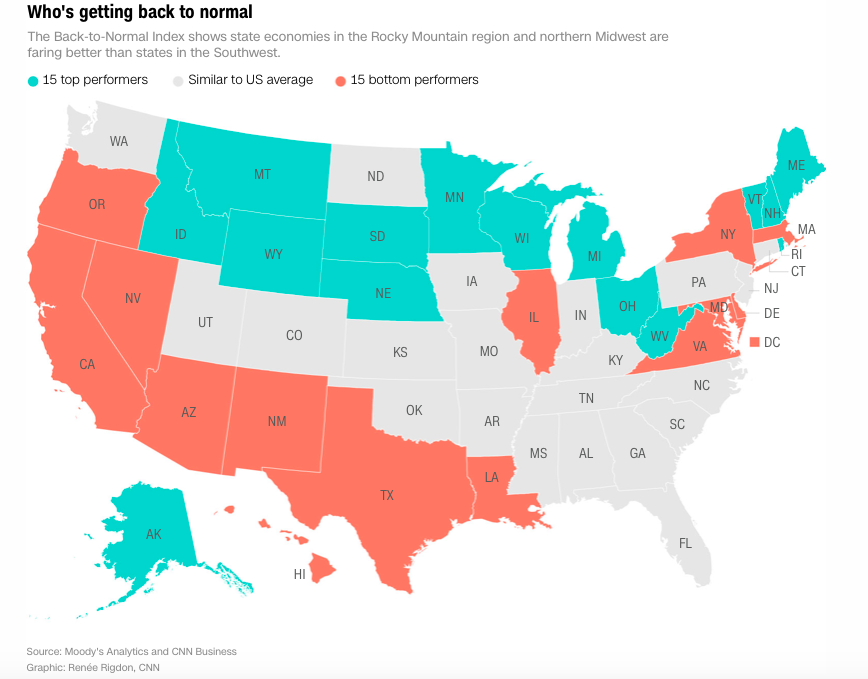 Connecticut’s economy is 81 percent of what it was in March before the shutdown of businesses due to the COVID-19 pandemic, according to a new “Back to Normal” index compiled by Moody’s Analytics and CNN Business.

The index shows Connecticut is 23rd in the country for returning to a pre-pandemic economy, although Connecticut ranked high for ongoing unemployment claims which amounted to 12 percent of the state’s labor force, according to the index.

The national average for returning to pre-pandemic economic activity was 78 percent, but states were affected in vastly different ways.

CNN’s analysis noted that states that were quicker to reopen “have paid an economic price,” but, according to the metrics there appears to be little rhyme or reason to that statement.

States like Massachusetts, New York and Illinois were slow to reopen, mirroring Connecticut’s pandemic reopening schedule, but have fared worse than Connecticut in terms of coming back from the economic devastation of the pandemic.

Meanwhile, states that have been heavily criticized for reopening too soon like Florida and Georgia are, along with Connecticut, within the average range of economic rebound.

However, those states also saw higher economic activity during April and therefore experienced a less dramatic uptick in economic activity, meaning states like Connecticut had a steeper recovery since bottoming out in April.

According to the data, Connecticut’s economic activity was only 52.5 percent of its pre-pandemic activity in April during the height of the pandemic shutdown, compared with 48.8 percent in New York, 52.3 percent in Massachusetts and 56 percent in Illinois.

States that have fared best tend to be low population western states with little reliance on the tourism industry, like Wyoming, and the upper tip of New England, like Vermont, New Hampshire and Maine.

Although Connecticut was initially scheduled to be reopening more of its economy based on low infection and hospitalization rates, Gov. Ned Lamont put a hold on the plan as other states saw an increasing number of infections.

According to the data supplied in the report, the hours worked at small businesses in Connecticut are 14.6 percent lower than pre-pandemic levels, but that represents a steep increase from the 83 percent below in mid-April.

Restaurant reservations are just .3 percent lower than March as some restaurants have reopened their doors to limited indoor seating and outdoor seating if its available. This may be due to more people making reservations because of limited seating capacity and does not necessarily reflect the state of the restaurant industry as a whole.

However, even with an 81 percent return to normal economic activity, the report notes that it is a long way to go for the state and for the country, so “back to normal” may take a long time.