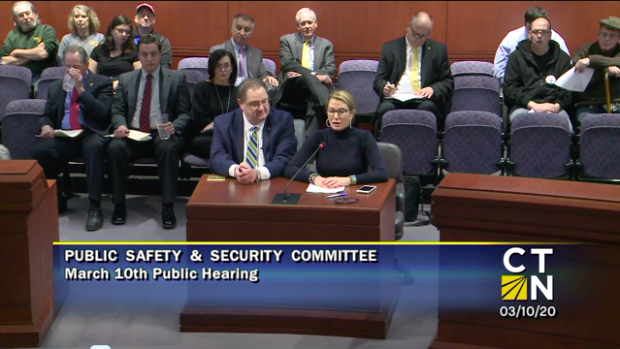 In testimony before the Public Safety and Security Committee, House Republican Leader Themis Klarides, R-Derby, and Rep. Mitch Bolinsky, R-Newtown, said there has been no evidence that the CT AFL-CIO replaced missing funds dedicated to support workers affected by the Sandy Hook shooting.

After an audit of the Sandy Hook Workers Assistance Fund discovered that $103,713 was missing, the CT AFL-CIO said they immediately replaced the money, a point reiterated by CT AFL-CIO spokesman Eric Chester in testimony during the same hearing.

The Sandy Hook charitable fund was being administered by the John J. Driscoll United Labor Agency, the charitable arm of the AFL-CIO, starting in 2016 but by 2018 most of the money was gone, reportedly having been “commingled” with other union activities.

Klarides and Bolinsky were testifying in support of a bill that would recover the funds from the ULA and return control of the money to the Judicial Department’s Office of Victim Services.

Klarides said the bill has the support of leadership on both sides of the political aisle in the House of Representatives and the Senate.

But the discrepancies, conflicting reports, open investigations and pending legislation means more questions remain over how the money was used and what role certain union officials and board members of the ULA had in commingling the money with other union spending.

“We discovered at the end of 2018 and began the inquiry in February of 2019 that the fund had been emptied,” Bolinsky said at the hearing. “The money that was mistakenly spent and was supposed to be replaced, we have no evidence that’s been done.”

Ranking member on the commission, Tony Hwang, R-Fairfield, said that he has received “conflicting reports” on whether the money was restored to the fund and asked the legislators to clarify.

Klarides said that she has met with the state auditors and the CT AFL-CIO to discuss the matter and that the union has been forthcoming during those meetings and is conducting its own investigation and audit into the matter.

Eric Chester, spokesman for the CT AFL-CIO, said the money has been replaced into the account and is ready to be transferred back to the state if the bill passes.

Chester thanked the representatives for pursuing the matter and said the investigations have been “exhausting” and that CT AFL-CIO is “running toward this issue, not away from it.”

While the ULA was administering the funds, they paid for six claims totaling $6,323 and used an additional $5,791 for administrative costs. The auditors said there was no evidence anyone was denied a claim, but Bolinsky says at least one State Police officer is waiting on a claim.

The public hearing on the bill came just one day after it was revealed that State Senator Julie Kushner, D-Danbury, was treasurer of the ULA during years in which the charitable funds went missing.

The matter is being investigated further by the Auditors of Public Accounts and the Attorney General’s Office. House Republicans also sent a request to the Office of the Chief State’s Attorney to conduct an investigation, but it is not yet known if they have taken up the matter.

Klarides said the fund remains active and the point of the bill is to ensure that affected workers are able to submit their claims and that this never happens again.