Truck advertising CT2030 outside the Capitol paid for by labor union 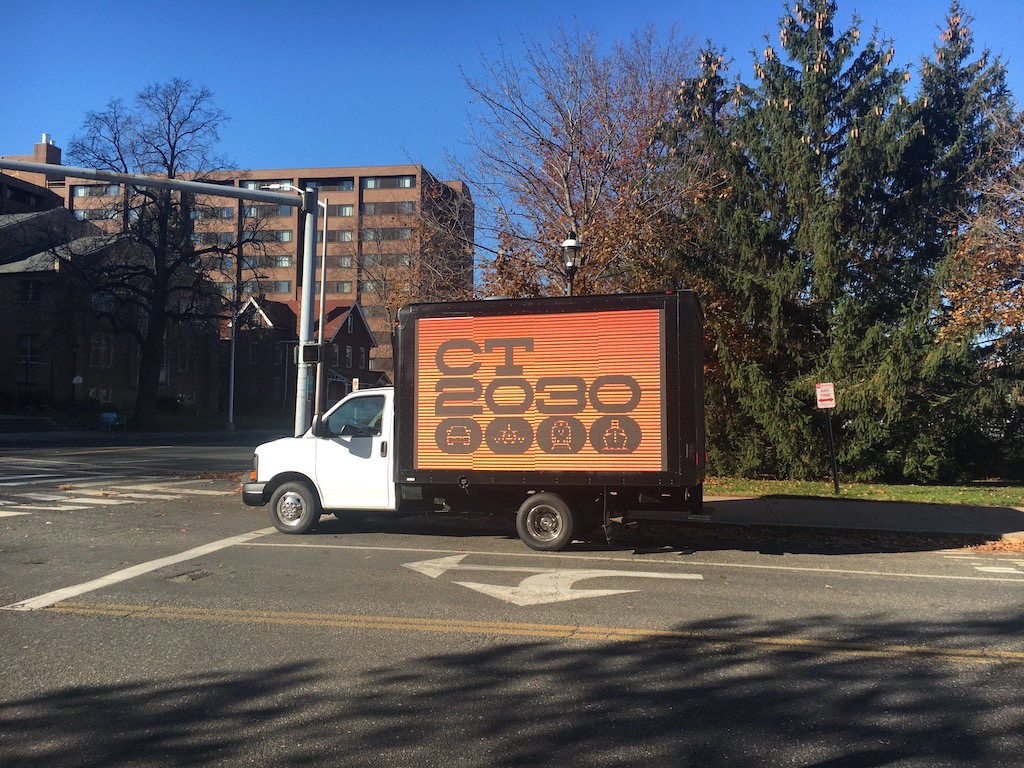 Lawmakers and visitors to the Legislative Office Building throughout the week may have noticed a truck with a digital sign advertising Gov. Ned Lamont’s new transportation plan called CT2030. It’s been driving in circles outside the LOB since Lamont met with Democratic senators earlier in the week.

The truck, carrying Rhode Island license plates, was paid for by the Laborers’ New England Region Organizing Fund based out of Providence, according to Chad Brault who was driving the truck at the time.

Brault is the regional organizer for the Laborers’ International Union of North America, a 500,000 member union made up largely of construction and trade workers.

The Laborers’ International Union is an affiliate of the AFL-CIO and a member of Move CT Forward, a coalition of construction associations and unions that have lobbied heavily on behalf of transportation and tolling plan put forward by both Gov. Dannel Malloy and Lamont.

Sal Luciano, president of the Connecticut AFL-CIO, is also supporter of Lamont’s CT2030 plan, noting that the governor assured him the $21 billion in infrastructure projects would be completed using project labor agreements that typically guarantee the work will be done by union contractors.

With a potential $21 billion in projects on the line, construction associations and unions have been vocal in their support of the transportation plans put forward by both Gov. Dannel Malloy and Lamont.

LiUNA has faced some difficulties as of late. Their multi-employer pension plan is underfunded and has resulted in workers only receiving 47 percent of their benefit if they cash out early, according to a report in The Star.

Lamont’s new transportation plan, which leveraged toll money collected at 14 gantries at key locations around the state to pay for federal loans, received a chilly reception by Senate Democrats who backed off earlier support for tolling the state’s highways.

Senate Republicans pitched their own plan on Thursday which would shore up some of Connecticut’s pension debt using the Rainy Day Fund and use the savings to leverage the same federal loans outlined in Lamont’s plan.

Move CT Forward and other construction associations and unions say there has been little work in Connecticut in recent years and hope that a transportation initiative will bring new work for their members.

**Meghan Portfolio contributed to this article.**