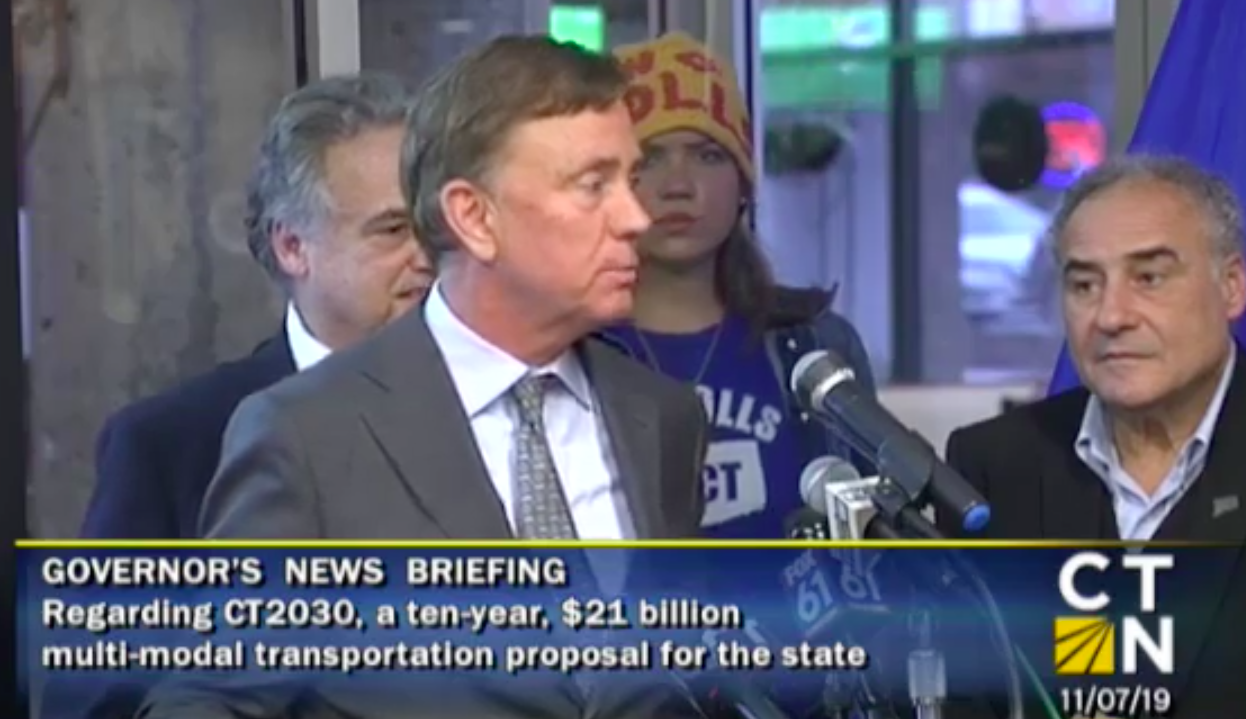 Gov. Ned Lamont released his CT2030 website on Thursday after unveiling his ten-year transportation plan at a meeting at Jackson Laboratories in Farmington.

The website allows the public to see details of the governor’s plan for highways, bridges and mass transit, lists projects to be completed and funding sources.

Noticeably absent from the website is the word “tolls.”

Instead, the website uses the word “user fees” when describing overhead gantries that will be placed at key project locations like the Mixmaster in Waterbury.

“Rather than delay construction and burden CT taxpayers with the total cost of improvements plus interest, fourteen CT 2030 projects will be funded by the implementation of a new and modest user fee program beginning in 2023,” the site reads. “Roughly 40% of those user fees will be paid by out-of-state drivers, and still more will come from the heavy trucks that do the most damage to our roads.”

The word “toll” is only found once when describing the electronic gantries, noting they will not be “toll-booths.”

Although clunky at times, the change in language marks an attempt by the administration to shift public perception over transportation funding with tolls after three years of unsuccessful attempts by Gov. Dannel Malloy and Lamont to implement a widespread tolling system in Connecticut.

Groups like No Tolls CT have been vocal throughout the state in opposing tolls, often using the word itself to create catch-phrases like “Vote for tolls, lose at the polls,” which the group put on billboards along interstate highways and in mailers to Connecticut residents.

Indeed, even the term “No Tolls” has become a bit of a rallying-cry among members of the public opposed to tolls.

According to the most recent poll taken by Sacred Heart University, nearly 60 percent of Connecticut residents were not happy with previous plans to institute electronic tolls on highways.

“No User Fees” might not prove as catchy with the public – if the administration can successfully implement the language change into the public sphere.

Patrick Sasser, head of No Tolls CT, said he doesn’t plan on changing his organization’s name and he thinks the administration is “trying to change the narrative.”

“Our slogan has obviously been effective, and I think the governor and his team recognize that,” Sasser said.

Nevertheless, reporters and the governor did use the term “tolls” during the governor’s press conference following the plan’s unveiling.

The revenue collected from the gantries – reportedly $320 million per year – will be used as collateral for low-interest federal loans supplied by the Federal Department of Transportation.

Five percent of the revenue will also be shared with the municipalities where the bridges are located.

According to the website, the money collected from the tolls will be protected from legislative diversions by federal law and the state’s Constitutional Lock Box, but the funds may be used for other transportation improvements.

Drivers with a Connecticut E-Z Pass will receive a 20 percent discount off the base toll rate and the administration estimates that 40 percent of the revenue will be paid by out of state drivers.

“For generations, the state has neglected critical investments in our infrastructure, hampering economic growth and leaving residents in endless hours of traffic wondering why state officials didn’t fix these problems years ago,” Governor Lamont said in a press release. “For the future of our state, we can no longer kick the can down the road on these improvements—we must fix this long overdue problem and move our state forward today.”

Sasser said his group isn’t backing off and said the new plan amounts to “putting lipstick on a pig.”

“It doesn’t matter if you call them tolls or user fees,” Sasser said. “The people still don’t want them. It’s still a tax on driving to work.”

By Marc E. Fitch November 13, 2020 Taxes, Tolls One Comment
During an October 29 hearing before the Freedom of Information Commission, an attorney representing the Office of the Governor said
Read More