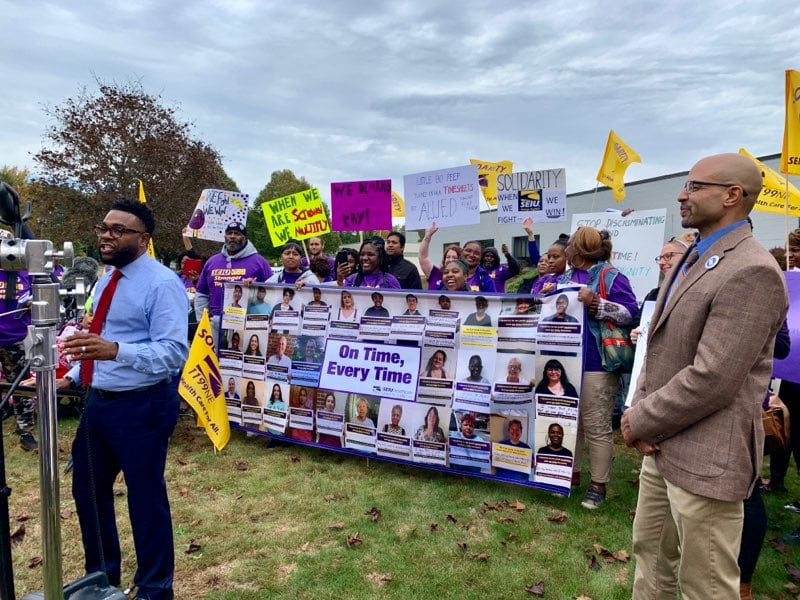 SEIU Healthcare 1199NE held a rally outside the offices of Allied Community Resources in Enfield on October 14 saying the company has not been paying personal care attendants on time.

But the rally may be a case of the union biting the hand that feeds it.

According to the Department of Social Services, Connecticut was allowed to side-step a Medicaid regulation change that would have ended automatic union dues deductions for PCAs employed through Connecticut’s PCA Workforce Council.

Because Allied Community Resources and Sunset Shores of Milford act as fiscal intermediaries between the state and PCAs by tracking hours and issuing paychecks, the Center for Medicare & Medicaid Services said Connecticut could continue deducting union dues and sending that money automatically to SEIU 1199, rather than forcing the union to collect dues from members through personal checks.

According to federal statute, Medicaid money is supposed to go directly to the beneficiary or the service provider — which can be a home services company or, in the case of Connecticut’s self-directed care model, the PCA caring for the person in need.

An Obama-era regulatory change allowed third-party deductions from Medicaid payments, which opened the door for union dues to be automatically deducted from PCA paychecks – known sometimes as a “Medicaid dues skim.”

Under the Trump administration, however, CMS reverted back to the original statutory language, which would have ended automatic dues deductions from PCA paychecks.

The Connecticut Office of the Attorney General estimated the regulatory change would have affected 4,300 unionized PCAs in Connecticut.

Unionized PCAs pay 2.25 percent of their pay up to $79 per month toward union dues, meaning the work-around through Allied Community Resources potentially keeps millions flowing to SEIU 1199.

Unionized PCAs pay 2.25 percent of their pay up to $79 per month toward union dues, meaning the work-around through Allied Community Resources potentially keeps millions flowing to SEIU 1199.

“CMS determined the state is not subject to its rule regarding Medicaid payments to third parties and, therefore, could continue to deduct union dues from the paychecks of PCAs and provide the dues to the union,” Dearborn wrote in an email.

Under Connecticut’s self-directed care model, the person receiving the services acts as the employer, but Allied Community Resources and Sunset Shores assist the Medicaid recipient by taking care of payroll deductions such as federal and state taxes.

“The arrangements under FMS are not affected by the provisions of the final rule because this model involves the FMS vendor receiving monies from the state to administer the participant-directed budget and make payment to providers on behalf of the beneficiary,” Dearborn said.

But a statement from the Connecticut Office of the Attorney General indicates the information provided to DSS might not be iron-clad.

Attorney General William Tong – who was supported by SEIU during his election campaign — joined several other states in filing suit against the Trump administration to challenge the CMS ruling, and the Attorney General’s Office said they are still pursuing the lawsuit.

While we have received some assurance from CMS that Connecticut may continue its use of fiscal intermediaries to make payroll deductions for union dues and otherwise, that has yet to be formally established within the litigation. Until that occurs, we will continue to join with our sister states in challenging the legality of the Medicaid rule change.

Office of the Attorney General

“At this time, Connecticut remains in the multistate lawsuit,” the Attorney General’s Office wrote in an email. “While we have received some assurance from CMS that Connecticut may continue its use of fiscal intermediaries to make payroll deductions for union dues and otherwise, that has yet to be formally established within the litigation. Until that occurs, we will continue to join with our sister states in challenging the legality of the Medicaid rule change.”

“The new federal rule directly undermines states’ rights to allow our home care workforce to unionize, to the detriment of our homebound seniors, individuals with disabilities, and the home care workers themselves,” the Attorney General’s Office said.

SEIU 1199 represents approximately 8,500 PCAs through the state’s collective bargaining contract, although not all of them are dues-paying members because membership is voluntary under the U.S. Supreme Court’s 2014 decision in Harris v. Quinn.

Gov. Dannel Malloy created the PCA Workforce Council by executive order in 2011 in order to unionize PCAs after bills in 2009 and 2011 were defeated during the legislative process.

Outside the offices of Allied Community Resources, more than 100 workers rallied to demand the state’s fiscal intermediary pay workers on time.

“We’re here because we’re putting Allied on notice, that we expect our paychecks to be delivered accurately and on time, every time,” said Rob Baril, president of SEIU Healthcare 1199 NE.