Connecticut has Lowest Personal Income Growth Since 2007, According to Pew 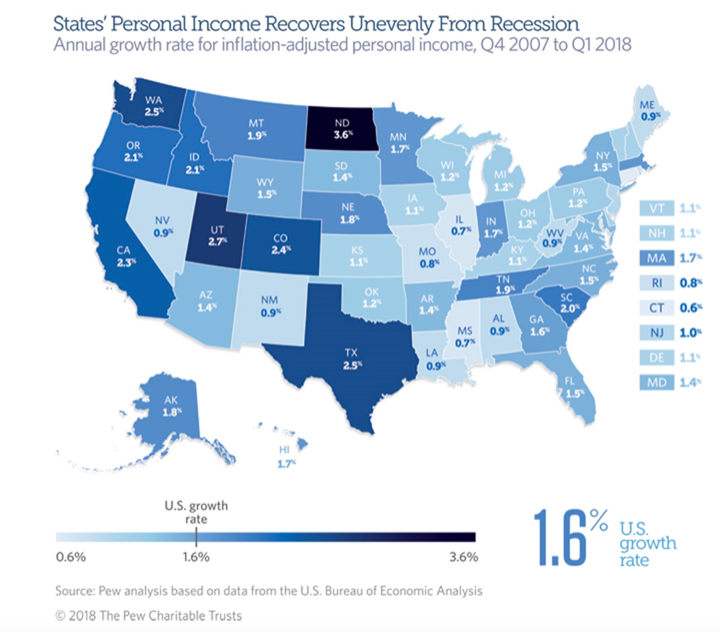 Connecticut remained dead last in the nation for personal income growth since 2007 in the latest analysis by Pew Charitable Trusts.

Personal income in Connecticut grew only .6 percent per year since just before the 2008 recession, while the national average is 1.6 percent.

Connecticut’s exceptionally slow income growth put it behind states like Illinois, Missouri and Rhode Island and Connecticut was one of only five states which saw personal income decline over the past two years.

New York saw income growth of 1.5 percent and Massachusetts grew 1.7 percent per year, according to Pew.

The 2008 recession hit Connecticut’s economy exceptionally hard and the state has yet to fully recover from its effects on jobs, income growth, and home values.

Pew attributed to Connecticut’s lackluster performance to “losses in manufacturing, especially in the chemical industries.”

Even as Connecticut saw 1.1 percent personal income growth in the first quarter of 2018, it remained well behind the national average of 1.7 percent.

“Factor in inflation and the rising state and local tax burden and it’s easy to see that real disposable incomes are actually dropping,” Klepper-Smith said. “Not the recipe you want for robust income growth.”

North Dakota still has the highest overall growth, even though it was a dramatic downturn over the past year because of the state’s reliance on the oil industry.

Along with North Dakota, Utah, Texas, Washington and Colorado had the highest rise in personal income since 2007.

Personal income is measured with a combination of paychecks, retirement payments, health insurance, retirement income and income from public assistance.

The figure is based on a compound annualized growth rate, meaning Connecticut’s income rose approximately .6 percent per year when spread across all years, 2007 to present.

This article was updated to reflect Connecticut’s .6 percent growth is an annualized growth rate