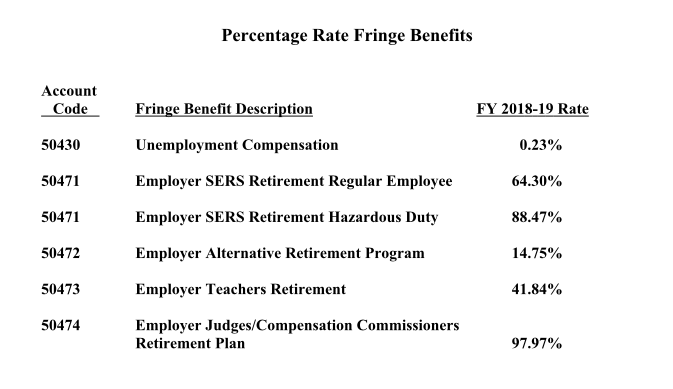 Fringe benefit rates for Connecticut’s state employee and teacher retirement plans in 2018 jumped as much as 52 percent, according to figures released in a memorandum from the Comptroller’s Office.

The Comptroller’s Office said in an email the drastic increase from the state’s 2017 benefit rates is due to Connecticut’s unfunded pension liabilities.

“Connecticut’s fringe benefit rate growth is a direct result of the state’s unfunded liability – the consequences of historic irresponsibility and failure to meet the minimum annual contribution to the retirement system,” The Comptroller’s Office wrote in an email.

Retirement costs for Connecticut teachers saw the largest increase, growing 52.6 percent in one year — from 27.41 percent of payroll to 41.84 percent.

The retirement plan for judges and compensation commissioners now costs 97.97 percent of payroll — up from 86.58 percent — a 13.1 percent increase.

State costs for the average state employee’s retirement plan also jumped from 56.58 percent of payroll to 64.30 percent — a 13.6 percent change over last year.

The Connecticut Colleges and Universities system has raised tuition twice in the past three years to make up for increasing employee benefit costs, requiring a one-time bailout by the legislature in 2017. The Board of Regents is moving to consolidate the community college system in order to save money.

“In 1992, the state committed to pay its unfunded pension obligations by 2032. The payment plan was flat and predictable — like a fixed-rate mortgage. In the mid-1990s,” the statement from the Comptroller’s Office said. “However — when the state enjoyed consistent surpluses — government decision-makers negotiated an agreement to lower the annual pension fund contributions. But this meant that payments would sharply increase like a balloon mortgage in the distant future. The distant future is now.”

Gov. Dannel Malloy in 2017 refinanced the SERS debt until 2046 to keep the costs from spiking to unsupportable levels. Despite the change, the state’s SERS payments will grow from $1.6 billion this year to $2.2 billion by 2023.

The TRS system is also projected to grow significantly from $1 billion this year to $1.4 billion in 2023. Connecticut cannot refinance the TRS plan due to a $2 billion bond taken out in 2008 to bolster the system.

The numbers are daunting for Connecticut, which faces a $4.6 billion deficit for the upcoming biennium, and the rising pension and retiree healthcare costs threaten to crowd out funding for other state services.

Lawmakers are left with few options to rein in pension costs due to the 2017 SEBAC concessions agreement, which locked state employee benefits in place until 2027 while granting pay raises and layoff protections until 2022.

Connecticut is one of only four states which sets employee retirement benefits through collective bargaining negotiation rather than in state statute.

Unlike SERS, teacher pensions can be changed legislatively. Lawmakers increased teachers’ pension contributions to 7 percent of salary during the 2017 budget negotiations, which was estimated to bring in an additional $30 million.

However, the state is using those increased funds to offset it’s yearly contribution to TRS.

The Comptroller’s Office notes the “normal cost” for fringe benefits — the amount Connecticut would have to pay without the unfunded liabilities — is a “manageable” $262.7 million per year and will actually decrease next year to $245.7 million next year.

“Also contributing to growth in fringe rates is the decrease in the number of state employees, because the cost of the unfunded pension liabilities and retiree health care is spread across a smaller salary base,” the Comptroller’s Office wrote.

But the underfunding of state employee benefits in the past — which required approval by both union leaders and the legislature — means pension and healthcare costs will continue to grow, even if Connecticut’s economy and tax revenue does not.