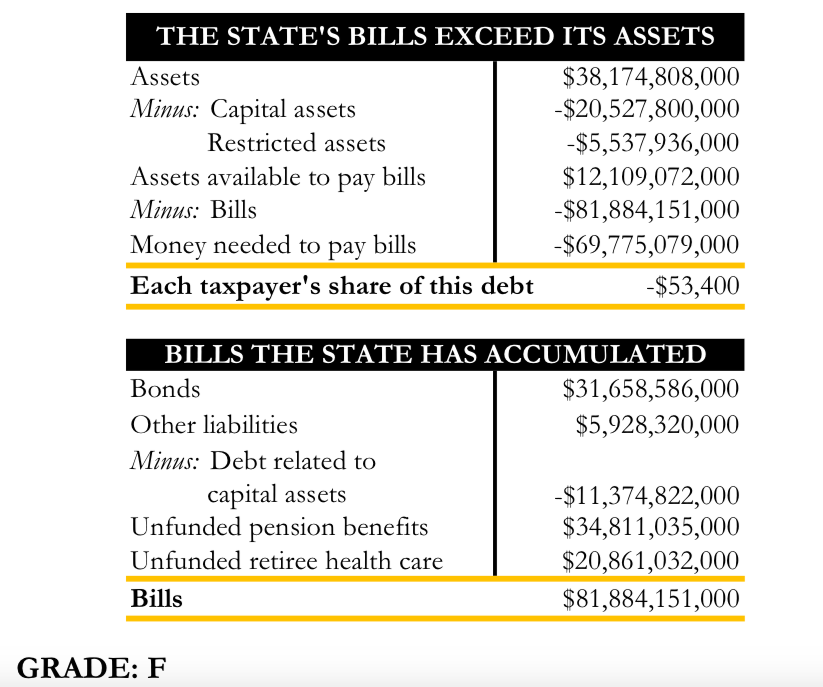 Connecticut’s official balance sheets will be noticeably worse next year due to changes in how the state reports its retiree healthcare liabilities, according to a report by the organization Truth in Accounting.

Truth in Accounting issued Connecticut a failing grade based on its 2017 Comprehensive Annual Financial Report and said the state is “hiding” $10.4 billion in retiree healthcare debt.

“Connecticut’s financial condition is not only concerning, but also misleading as government officials failed to disclose significant amounts of retirement debt on the state’s balance sheet,” the report says. “As a result, residents and taxpayers have been presented with an inaccurate and untruthful accounting of the state government’s finances.”

According to Connecticut’s 2017 CAFR the net liability for Other Post Employment Benefits is $10.4 billion, but Truth in Accounting says that number is actually more like $20.5 billion because starting next year the state will have to report the full value of its healthcare liabilities.

Peter Bergman, Director of Research for Truth in Accounting, says the true retiree healthcare numbers are buried in the CAFR and require a lot of digging to find. The result is a balance sheet that looks better than it actually is, which could be problematic for a state already facing significant financial difficulties.

“It’s not on the balance sheet, but it will be next year,” Bergman said. “So the net position Connecticut is reporting is overstated.”

The change in valuation will occur due to a change in government accounting standards enacted by the Government Accounting Standards Board. Bergman says some states have already implemented the change, but not Connecticut.

The change will affect not only Connecticut’s bottom line but all states, and may result in a large-scale wake up call regarding retiree healthcare debt.

According to a Wall Street Journal article, New York’s retiree healthcare debt will jump from $17 billion to $72 billion once the new standards are put in place.

The Truth in Accounting report shows Connecticut owes $81.9 billion in bills but has only $12.1 billion in assets, leaving Connecticut in the red by nearly $70 billion, amounting to $53,400 per person in the state.

Although Truth in Accounting’s findings are dismal, the true numbers may be much worse.

Bergman says Truth in Accounting uses only official state numbers, but other organizations have reported Connecticut’s pension and OPEB debt closer to $127 billion when using a more modest discount rate.

Gov. Dannel Malloy negotiated a refinancing of the state employee pension debt in 2017 to avoid a spike in the state’s payments, however the cost will continue to grow from $1.5 billion per year to $2.2 billion before leveling off.

The teacher pension fund also threatens to increase dramatically in the coming years. Connecticut’s Teachers Retirement System has $13 billion in unfunded liabilities and payments toward the system have grown 145 percent over the past 10 years, according to the Office of Fiscal Analysis.

Gov. Malloy wanted to restructure the teacher pension debt — similar to what he did with state employee pensions — but doing so will likely hurt Connecticut’s bond rating due to a $2 billion pension obligation bond taken out in 2008 to bolster the system.

In 2011, state employees began paying 3 percent of their salary toward retiree healthcare during their first 10 years of service. The state began to match that contribution in 2017.

Fringe benefits costs were cited as one of the main problems for the Connecticut College and University System, which may have to increase tuition for students. The state is currently trying to consolidate its public university system to save money but has not been successful.

Similarly, the Connecticut Department of Labor says fringe benefits are driving up staffing costs and tried to balance that increase with a new tax.

The rate of Connecticut’s borrowing for state projects has also increased and Connecticut has received credit rating downgrades.

In 2010, Connecticut bonded $1.9 billion. In 2016, that figure had grown to $3.35 billion, according to CTStateFinance.org, a financial transparency site. Payments on the debt grew $200 million during that time.

Overall, Truth in Accounting gave Connecticut an “F” due to its high debt burden and lack of transparency regarding its pension and OPEB liabilities.