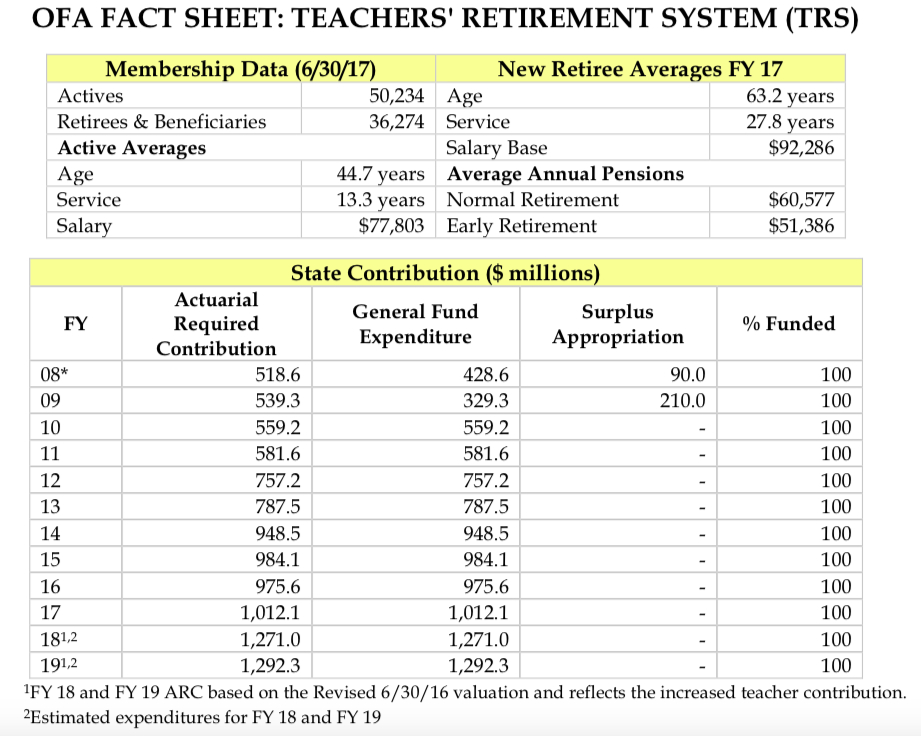 Connecticut’s Teachers Retirement System is underfunded by at least $13 billion and the state’s actuarily required contribution has grown 145 percent over the past ten years, from $518 million per year to $1.27 billion, according to a fact sheet released by the Office of Fiscal Analysis.

Despite the increased payments toward teacher pensions, the funded ratio for TRS has actually decreased from 70 percent in 2008 to 56 percent in 2018.

Connecticut has been paying the full ARC since 2008, when the state took out a $2 billion bond meant to bolster the pension system.

The fact sheet also listed average salaries for working and retiring teachers, as well as the average pension payout for a Connecticut teacher.

Retiring teachers in Connecticut averaged $92,000 per year in salary after 27 years of service, according to the OFA.

The substantial salaries figured into teachers’ pension calculations, which averaged $60,577, the highest average pension in the country, except for Washington D.C., according to TeacherPensions.org.

Connecticut teachers do not pay into, nor do they receive, social security benefits. Instead, they contribute 7 percent of their salary toward their pension, while the state contributes 27 percent.

The growing costs of the state’s teacher pension liabilities are leading lawmakers to look for solutions — some big, some small.

Unlike the State Employee Retirement System, teachers’ retirement benefits are set in statute and can be changed legislatively, but that doesn’t make it easy. Lawmakers face strong political headwinds in making any change to teachers’ benefits.

Part of the 2017 budget included a one percent increase in Connecticut teachers’ pension contribution. The states’ teachers unions pushed back against the change and this year have pushed legislation to lower their contribution back to 6 percent.

Gov. Dannel Malloy attempted to force municipalities to shoulder one-third of the cost of teacher pensions, but met with heavy resistance from municipal organizations who said the increased costs would drive up property taxes.

Malloy has also attempted to refinance the teacher pension liabilities to stretch out the payments. But State Treasurer Denise Nappier says any restructuring of the debt would violate the 2008 bond convenant, and hurt Connecticut’s already-damaged bond rating.

The Commission on Fiscal Stability and Economic Growth recommended directing cash from CT Lottery Corp. to TRS, which would increase the funded status of the system and lower the state’s annual contribution requirement.

CT Lottery brings in roughly $330 million per year which is used to fund various programs through the state’s General Fund, such as Department of Education, Medicaid, and hospitals.

Nevertheless, lawmakers will be tasked with finding a solution at some point in the near future. A study by the Center for Retirement Studies at Boston College predicted that under the right circumstances, payments toward teacher pensions could swell to nearly $6 billion.

Although Nappier says such growth is unlikely, for a state faced with substantial deficits for the foreseeable future, any increase in costs may be more than the state can handle.