Connecticut government unions and union-backed organizations immediately signaled they would attempt to unseat the Democratic lawmakers that backed a new budget passed in both the Senate and the House last week.

The bipartisan budget included labor reforms, such as requiring a vote on every union contract, and would require that state employee retirement benefits be set in state statute after 2027. Connecticut is one of only four states that does not set benefits in state statute.

Immediately following the passage of the budget, the labor-backed Working Families Party called for the ouster of Senators Paul Doyle, D-Wethersfield, Gayle Slossberg, D-Milford, and Joan Hartley, D-Waterbury, who broke ranks with fellow Democrats to pass the budget in the Senate. 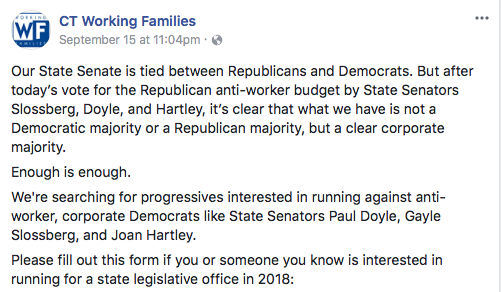 The WFP similarly called out five Democratic members of the House of Representatives and began searching for candidates to run against them.

At the same time, state employee unions including the AFL-CIO, the American Federation of Teachers and AFSCME Council 4, decried the budget vote, which they called an “austerity budget.”

“The insistence of Senate Republicans and a handful of Democrats on protecting corporations and the ultra-wealthy is an insult to public workers who have sacrificed billions in wages and benefits to help Connecticut dig out of a hole created by austerity budgeting,” said Sal Luciano, executive director of AFSCME Council 4.

Luciano is also the boss of House Speaker Joe Aresimowicz, who is an education coordinator for AFSCME.

President of the AFL-CIO, Lori Pelletier, tweeted that she had a “15 ft tall inflatable skunk” and said details of a “mobile rally” were forthcoming. The union groups all called for Malloy to veto the bipartisan budget.

It wouldn’t be the first time the WFP and state government unions have used inflatable animals in protests.

During their “Lifestyles of the Rich and Shameless” bus tour through Greenwich, union members and the Connecticut WFP left billion dollar tax bills on the driveways of CEOs’ personal homes and inflated a giant pig outside the headquarters of AQR Capital.

Doyle, Slossberg and Hartley were the deciding votes in the Senate on July 31 on the union concessions deal negotiated by Gov. Dannel Malloy and union leaders. That vote guaranteed union members pay raises, layoff protections and extended their benefits contract until 2027 – making it a 30 year contract.

However, the senators tempered their support with a list of 12 cost-saving reforms they wanted to see included in the budget, including requiring a vote on every union contract and setting retirement benefits in state statute starting in 2027.

Only one of those reforms made it into the budget proposal put forward by House Democrats. The Republican budget, on the other hand, included most of their reform ideas.

Sen. Doyle said that he expected to receive criticism but was “tired of the threats.”

“My party may not be happy with me, but to be honest, I don’t care,” Doyle said. “I believe our state is living beyond its means. Our future budget picture is very bleak.” Doyle added that a bipartisan budget would be the best way to help Connecticut’s economy.

Slossberg said she is “worried about the future,” but that Connecticut was once again “looking down the same path,” before casting her vote for the budget deal.

An article in the Hartford Courant showed that many of the three senators’ constituents were happy with their change of direction.

The WFP has challenged Democratic politicians in the past who did not toe the line on their agenda. They successfully ran Edwin Gomes, D-Bridgeport, and Joshua Hall, D-Hartford, against Democratic challengers during special elections.

Support from state government unions and the WFP were instrumental in winning Malloy his second term.

Malloy was cross-endorsed by the WFP in his 2014 race against Tom Foley and received 26,308 votes on that ticket. Malloy ultimately won the election by a 20,000 vote margin.

Malloy has said he will veto the budget and called on state lawmakers to return to the negotiating table but, so far, there have been no meetings.

If a budget is not reached by Oct. 1, the governor’s executive order will zero out education funding to 85 towns across Connecticut and severely slash funding for another 54 school districts, likely leading to teacher layoffs and increased property taxes.

The Connecticut Department of Revenue Services paid more than $12 million in interest for tax refunds totaling nearly $5 million because they withheld those refunds for upwards of seven years, according to a new audit. The audit listed tax refunds from years 2014 through 2018 and found that late returns ...