Connecticut’s growth in number of millionaires far below national average

Connecticut has long been known for having a high population of wealthy individuals, but according to a recent report Connecticut has fallen far behind other states in producing new millionaires.

Among the nine states which have the highest number of millionaires, Connecticut had the slowest growth in households earning over $1 million, according to a report by the New York-based Empire Center for Public Policy.

The number of Connecticut millionaires grew by only 27 percent between 2010 and 2015, compared to the national average growth of 55 percent, according to data from the Internal Revenue Service.

The only other state in the nation to perform worse than Connecticut was Louisiana, which saw an 18 percent growth in millionaires. 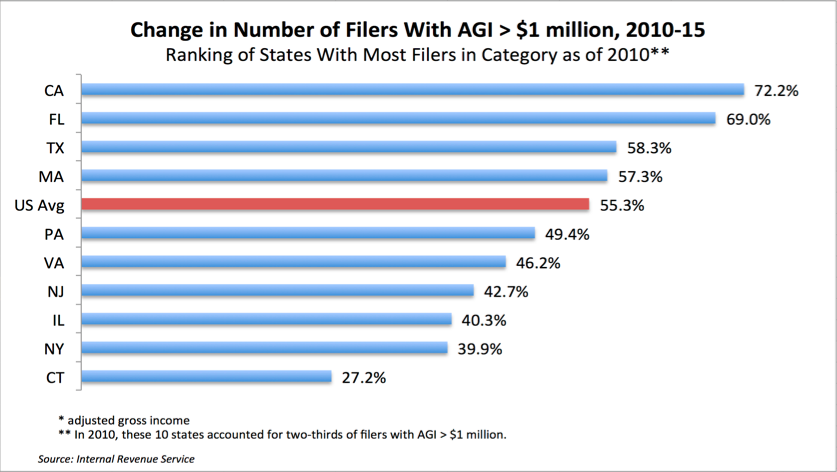 Among the nine states with the most millionaire filers, Connecticut was dead last behind New York, which saw an increase in millionaires by 39 percent. California took the top spot with 72 percent growth, followed by Florida, Texas and Massachusetts.

In 2010, Connecticut had 9,030 income tax filers which registered an adjusted gross income of over $1 million. That figure grew to 11,490 by 2015. But Connecticut’s growth of millionaires was significantly outpaced by the rest of the nation, including Massachusetts, which grew its number of millionaires by 57 percent.

The slow growth trend matches Connecticut’s overall slow economic and job growth during that same time period and could be troubling information for a state which relies heavily on its wealthiest citizens for tax revenue.

A 2014 study by the Connecticut Department of Revenue Services showed that 357 of Connecticut’s wealthiest families paid 11.7 percent of all the personal income taxes collected by the state.

This decline pushed Connecticut’s budget deficit up to $5.1 billion.

SEIU 1199 recently released a television ad calling for raising taxes on Connecticut’s wealthiest citizens, and, in the past, union leaders have pushed for increased taxes on corporations and hedge funds.

Bruce McGuire, president of the Connecticut Hedge Fund Association told lawmakers in April that hedge funds would move out of the state if Connecticut instituted a 19 percent surcharge on investment management services, something that was pushed for heavily by government union leaders.

Ultimately that bill did not pass out of committee, but Connecticut has lost major investors in the past, including Paul Tudor Jones, to Florida which doesn’t have a state income tax.

During public hearings before lawmakers, union leaders pointed out that Connecticut has actually gained three billionaires, according to Forbes’ magazine, and made the argument that those billionaires should have to pay more in taxes.

However, Sen. L. Scott Frantz, R-Greenwich, pointed out that those “new” billionaires had been living in Connecticut for “twenty years” and had only recently been included in Forbes’ list.

By Ken Girardin June 23 , 2021 Economy, Policy Corner
Connecticut added 8,600 private-sector jobs in May, its biggest monthly gain since September, but the state has a long way to go to recoup its early pandemic losses.  The state
Read More