Study: Only 34 percent of Connecticut teachers get a full pension, nearly half get nothing

Only 34 percent of Connecticut’s teachers will work until they reach retirement age and get the full value of their pension, according to a new study released by Education Next, a education journal produced by the Hoover Institution.

Of new teachers starting out in education, only 55 percent will actually stay in the job for a full 10 years so they are vested in the pension plan. That means the remaining 45 percent of teachers will get no pension benefit at all, not even Social Security credit, for their time spent teaching in Connecticut.

The study, entitled Why Most Teachers Get a Bad Deal on Pensions, highlights an inequality in the pension system, which benefits a minority of teachers while the majority who pay into the pension fund never see a return on their contributions.

“States’ own assumptions show that on average, more than half of teachers do not receive any employer pension benefits because they leave before they are eligible,” wrote study authors, Chad Aldeman and Kelly Robson. “Just one in five stays on the job long enough to receive full benefits at retirement.” 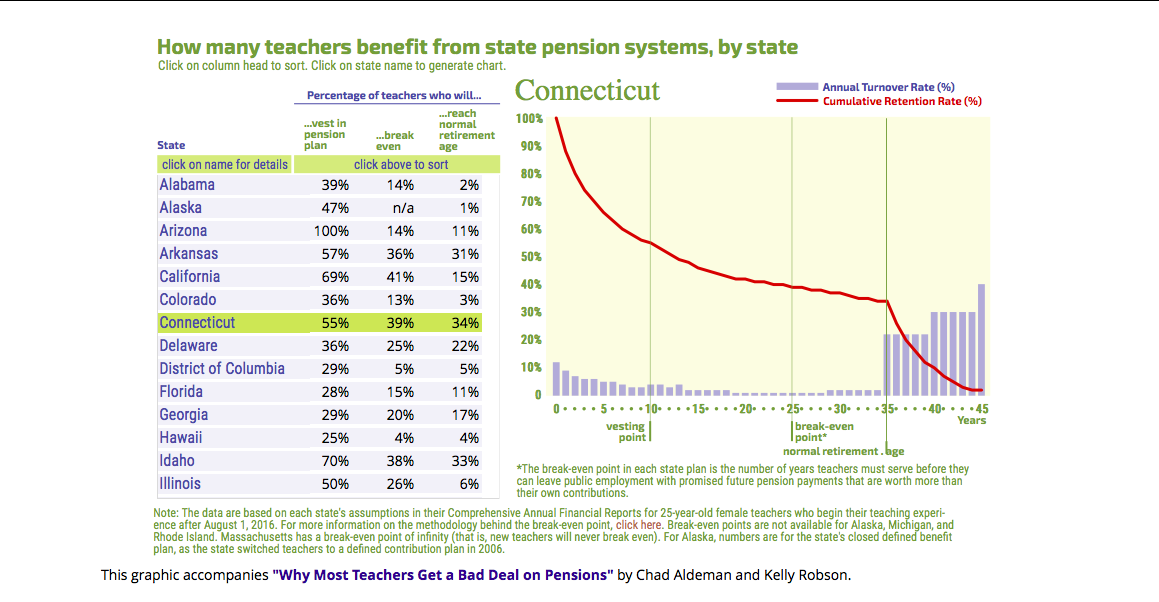 In Connecticut, new teachers pay into the pension system as soon as they begin working but are not eligible to receive any benefits until they have worked for 10 years. According to the study, 45 percent of teachers leave the profession before they are vested in the program. In Connecticut, those teachers can withdraw the money they paid into the pension fund to that point.

Teacher’s who remain working, however, are able to receive their pension after 20 years of service and reaching 60 years of age. Teachers pay 6 percent of their pay toward their pension but do not pay into nor receive Social Security.

However, a previous study by EdChoice showed that teachers actually have to work 25 years in order to see any return on their pension investment, due to inflation and life expectancy rates. The Education Next study refers to this point as the “break even point.”

Only 39 percent of teachers actually reach that break even point, but it is after the 25 year mark that the value of a teacher’s pension grows tremendously. “Even 15 or 20 years in, pension benefits for teachers are relatively small. Then comes year 25 (or 30, depending on the state), when the value of a pension soars.”

Teachers who leave the profession before that point risk losing money because they have paid into the pension fund more than they will receive in benefits.

Connecticut has one of the highest average teacher pensions in the country at $59,000 per year for those who retired in 2016, according to the Office of Fiscal Analysis.

But even with only 39 percent of teachers reaching the break-even point, the teacher pension fund is severely underfunded and its liabilities are hurting both taxpayers and the ability for schools to hire new teachers.

Connecticut borrowed $2 billion to help make up for the underfunding in 2008 but the situation has only worsened since then. Gov. Dannel Malloy has proposed forcing municipalities to pay for part of the teacher pension costs but this has proven unpopular with the public and municipal leaders.

Part of the problem is that the cost of the unfunded liabilities is going to skyrocket 600 percent by 2032.

Connecticut currently contributes $1 billion toward the teacher pension fund annually, but that is set to grow to approximately $6 billion, according to a study by the Center for Retirement Research at Boston College.

The authors of the study recommend a number of possible reforms that could improve the fiscal situation for pension funds and make them more equitable for all teachers, including switching to a 401(k) style or hybrid plan that is more portable and flexible for teachers.

Barring any major reforms like switching to a defined contribution plan, they also suggest restructuring how benefits are accumulated, so that the majority of benefits are not accumulated the last five to 10 years of employment.

“No state should have a 10-year vesting requirement for teachers. Not only would that be illegal in the private sector, but 10 years is simply too long to ask any worker to wait for a retirement benefit, especially in a profession like teaching, with relatively high turnover rates.”

By Marc E. Fitch April 20 , 2021 Education One Comment
After a chaotic school year during the COVID-19 pandemic, teacher unions who pressed the governor to keep schools closed are
Read More