Realtors rally at the Capitol to end outmigration crisis: “We’re in bad shape.”

An estimated 2,000 realtors and brokers gathered in Bushnell Park outside the Capitol building on Tuesday to urge lawmakers to create “A Connecticut We Can Sell,” and stop the outmigration crisis that is hurting homeowners, businesses and the real estate market.

The gathering was held by the Connecticut Association of REALTORS and included speeches by former UConn women’s basketball coach, Geno Auriemma, and a number of state representatives.

Carrying signs that read “Jobs = Growth” and “Give Us a CT to Sell”, attendees gathered on the green, flanked by food trucks and shuttle buses, to show Connecticut lawmakers that the outmigration crisis is real and is affecting the lives of homeowners and realtors across the state.

“A majority of the homes we sell are people leaving the state,” says Gene Fercodini, realtor and former president of the Greater Waterbury Board of Realtors. “We are one of the states that has a lot of inventory but not a lot of buyers.”

“We’re in bad shape,” said Bill Karchere, broker-owner of Keller Williams Platinum Properties in Norwalk and one of the three-year directors of the Mid-Fairfield County Association of Realtors. “Less people want to move into the state, we have nobody to buy and sell to.” 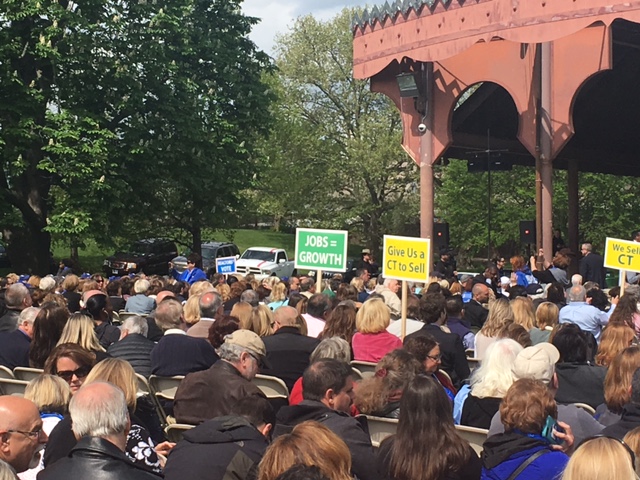 Data from a myriad of sources including the U.S. Census Bureau, the IRS and moving companies show Connecticut has had a net population loss for several years in a row, driving its population down to 2010 levels.

The loss of human capital has compounded a growing crisis in state government as income tax receipts have plummeted despite major tax increases in 2011 and 2015.

But those tax increases, coupled with continuing deficits, may have only worked to drive more people and businesses out of Connecticut, which already has one of the highest costs of living in the nation, making life especially difficult for young people starting out and retirees on a fixed income.

Both Karchere and Fercolini were worried about the loss of young people. “Half these kids go away to school and don’t come back,” Karchere said.

Part of the problem, however, may be slow economic growth in Connecticut. Since the 2008 recession, Connecticut has only regained 77 percent of the jobs lost, far lower than neighboring states, and has one of the slowest job growth rates in the country.

The concern that both men raised was the loss of businesses to other states. Karchere said the relocation of major companies like General Electric have meant big losses, but he worries also about the small to mid-sized businesses that don’t receive media attention when they decide to leave.

Fercolini said the loss of businesses is “devastating communities.”

However, facing a budget deficit of $5 billion over the next two years, lawmakers are scrambling for ideas to cut government spending and possibly raise taxes once again. Some of the taxes they’ve proposed would impact the real estate market directly.

Pamphlets distributed by the The REALTORS Political Action Committee urged readers to oppose, among other things, the business service tax, which died earlier in the year, and any additional real estate conveyance taxes.

“We need to stop the negative legislation that is hurting our ability to sell property in this state,” Karchere said. “We shouldn’t even be talking about these things.”

But there were a couple proposed bills this year that would help realtors, including two bills that would actually phase out the real estate conveyance tax, though neither made it through committee.

Overall, the realtors and brokers present say they’re looking for a Connecticut that could grow and start drawing people back from other states, increasing home values and creating a real estate market that isn’t overburdened with too much inventory.

For his part, Kurchere said lawmakers could take those first steps toward a “Connecticut We Can Sell” by balancing the budget and enacting “more legislation that allows us to grow Connecticut in an unimpeded manner.”

By Marc E. Fitch January 13 , 2021 Economy
The Connecticut Restaurant Association estimates that as many as 600 restaurants have closed permanently as a result of the COVID-19…
Read More