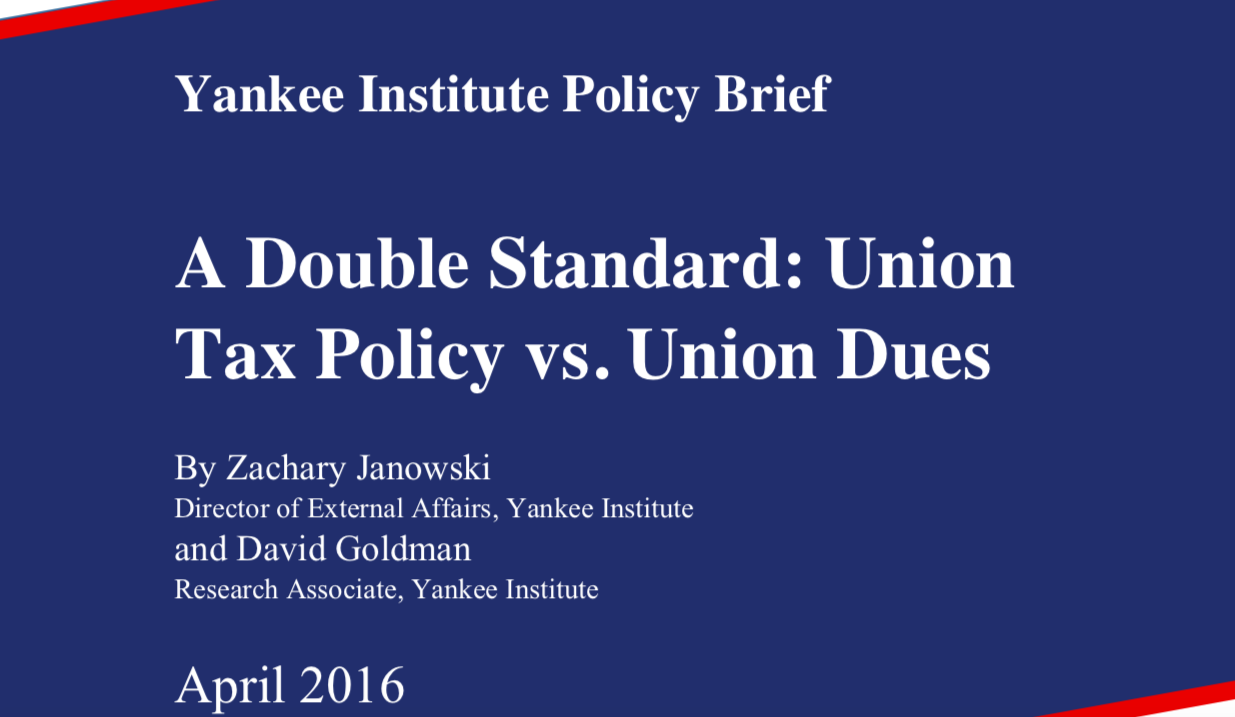 For footnotes and charts, please download the attached pdf.

Unions dominate government workforces in Connecticut, making them powerful special interest groups. When they are not advocating for increased pay and benefits for their members, union leaders frequently lobby for progressive tax policies from the government while ignoring their long-term effects. Consistently demanding that wealthier citizens pay their “fair share,” they pursue policies that tax a larger percentage of income for those earning more money and a smaller percentage for those earning less. Of course, Connecticut already has such a tax structure in place, but according to progressive union leaders, the mechanism should be amplified, causing the wealthy to provide an even larger share of the state’s revenues.

A look inside union finances highlights the hypocrisy of their advocacy for more progressive tax rates. Much like Connecticut’s state government derives revenue from taxpayers, a union derives its revenue from its members’ regular dues. This provides union leaders with the unique opportunity to create a financial model of the tax system they propose that state government adopt.

However, a review of the documents which set dues rates for state employees found no state bargaining units whose dues collection had a progressive structure, let alone to the degree of Connecticut’s income tax. As member incomes rise, Connecticut unions fail to increase the cost of membership in a progressive manner. Instead, the unions use a variation of fixed per capita rates, flat percentages and other regressive approaches to distribute the cost of running a union.

In other words, unions often put the heaviest burden on their lowest-income members. By contrast, Connecticut income tax rates are already progressive, insofar as that the rates rise as incomes rise. Take, for example, the rates assessed on an individual filer.

By contrast, if Connecticut raised money the way unions do, tax rates would be assessed per person or based on a single rate, often with a maximum dollar amount. A union-style per-person tax would cost each working person in Connecticut about $6,000, or nearly $120 per week. Another union-style approach would be a flat 5 or 6 percent tax rate with a maximum contribution of, say, $10,000.

Of course, there may be defensible reasons for unions to limit the cost of membership as income rises. For example, it is possible that lower-income members get all or most of the same benefits as members who earn more. It is also possible that high-income members would be less likely to belong to the union if the cost were proportionate to their incomes, which could have the perverse impact of reducing revenue despite the higher rates.

Data for this brief comes primarily from two types of sources. When labor unions and bargaining units set or change dues rates for their members, the new rates are published in memoranda by the Office of the State Comptroller. All dues rates are listed as reported in these memoranda since 2004. This brief also relies on additional information, such as membership numbers, revenue, and total receipts for five unions. This additional information comes from Labor Organization Annual Reports, or LM-2s, filed with the United States Department of Labor. Only unions of substantial size, and thus revenue, file these reports.

This brief will illustrate the constant growth in dues across many unions during the past decade, increasing the cost of union membership, especially for lower-income workers. Additionally, the dues rates and regressive structures will be compared across several labor unions, including the American Federation of Teachers (AFT), and the American Federation of State, County, and Municipal Employees (AFSCME), two of the largest unions in the state, and among the most vocal for progressive tax reform.

The State of Connecticut’s Labor Unions

Connecticut is among the top five states in the country in percentage of employed workers represented by a labor union, and while the rest of the country has experienced a recent decline in union membership (from 12.5 percent in 2004 to 11.1 percent in 2015) Connecticut has seen a simultaneous increase, from 16.6 percent to 17.4 percent.

Large labor unions, such as AFT, AFSCME, and others, are comprised of many smaller groups, or bargaining units. Each bargaining unit represents employees of related professions in a specific location. As a result, the larger unions influence workers in numerous fields. AFT, for example, represents workers in “healthcare, vocational education, financial management and planning, probation and child support enforcement, higher education administration and faculty, banking and fiscal regulation, forensic investigations and analysis, and facilities inspection and enforcement.” Additionally, they represent thousands in the Executive and Judicial Branches of the Connecticut state government. AFSCME, by its own billing, is the “largest trade union of public employees in the United States,” with more than 1.6 million members across the country.

Both AFT and AFSCME are among the fifty-six unions under the umbrella of the American Federation of Labor and Congress of Industrial Organizations (AFL–CIO), the United States’ largest federation of trade unions.
Connecticut’s workforce is just under 1.6 million people, with over 276,000 of these workers covered by a labor union. Sixty-two percent of the unionized workers are government employees.

A full-page ad in The Hartford Courant on Feb. 17, paid for by the American Federation of Teachers, criticized Gov. Dannel Malloy’s recent budget plans, saying that he “fails to ask the richest among us to pay a little bit more.” Regarding the state’s effort to obtain a sustainable budget, Lori Pelletier, president of the Connecticut chapter of AFL-CIO, testified before the state’s Finance Committee in 2015 that, “Connecticut needs revenue, not more cuts.” The AFL-CIO and other labor unions consistently push for this additional revenue through a progressive tax code, in which the rich pay a higher tax rate than the middle class. Additionally, the AFL-CIO expressly identified itself as “very strong proponents of progressive taxes,” in testimony before Congress by the organization’s former chief economist.

The state’s largest unions have continued to go on the record advocating for these progressive tax structures. They argue that the state’s budget would benefit by increasing taxes on the wealthy in order to lessen the burden on the middle class.

Union leader voices have gotten louder as a result of Governor Malloy’s latest signals that unions may soon see reduced benefits and layoffs in order to help solve Connecticut’s growing deficit. Pelletier accused him of trying “to protect the very, very, wealthy.” Last November, Sal Luciano, executive director of AFSCME Council 4 said, “every time there seems to be a problem, there seems like there needs to be a special tax on state employees.” As Xavier Gordon, president of AFSCME Local 269 asked, “Governor Malloy, how can you balance the budget on the backs of the less fortunate?”

“I know there are people who say there’s a spending problem. But,” Luciano insisted, “the fact is, it’s not true.” Luciano also said, “it’s time to ask Connecticut’s largest corporations and wealthiest citizens like Tom Foley to help prevent devastating cuts by making a fair contribution to the state budget.” AFT ultimately made this message even clearer with the aforementioned full-page ad in The Hartford Courant. It stated in large prominent print that,

“Connecticut has a fairness problem.”

Fairness is a key theme for the state’s labor unions. So are they on to something?

My, How the Dues Have Grown!

AFSCME’s mission statement advocates “fairness in the workplace…and prosperity and opportunity for all working families.” However, the union’s dues rates have increased by 30 to 50 percent across many local chapters over the last decade, affecting employees’ take-home pay. These rates do not distinguish between different levels of income, as a progressive system would, but rather function as a “flat tax” for each bargaining unit.

In another inspiring mission statement, AFT “champions fairness.” Yet AFT’s various local bargaining units have continued to demand larger sums from their members over time, despite Pelletier’s admission that their wages are worth less than in the past.

However, increases across the P-5 bargaining unit have not been uniform for all wage earners. Rather than take a stand and collect dues based on income – as they suggest for state tax rates – P-5 uses a very regressive approach.

Unions have not only failed to heed their own call for a progressive tax system, which would tax the wealthy more than those in the middle and lower classes, they have also instituted some examples of extremely regressive dues structures, actually taxing lower-income members more heavily than high-income members.

The State Vocational Federation of Teachers (SVFT), also a unit of the AFT, increased the overall cost of dues, though at a very inconsistent rate among its members. Full-time employees saw an 8.4 percent increase in dues over the last decade. Part-time employees presumably earn less money overall than their full-time counterparts. Yet, in those same eight years, part-time dues have more than doubled, increasing by 105.3 percent.

The P-5 bargaining unit of AFT’s Administrative and Residual Employees Union uses an inconsistent approach to distribute its costs to members.

Members in the lowest income range have had their dues increased by 39.9 percent. Those in the top income range for which consistent data is available had their dues increased by only 23.6 percent, and the income brackets between these two extremes follow a consistent inverse scale. Those with less income have seen greater increases in the cost of dues. Additionally, for every year in the study, those with less income are required to pay a higher percentage of their income in dues than their more financially-able counterparts – the reverse of both the sharply progressive system for which the union advocates, and the current government system against which they rail.

How Other Unions Fare:

Across the country, union membership is sharply declining, hitting a 97-year low in 2013, though Connecticut has experienced a marginal 0.4 percent growth since 2005. Only five unions can be evaluated here, chosen because of their substantial size and the availability of additional disclosures. These unions typically consist of several smaller bargaining units.

Four of these unions have shown an increase in revenue derived from member dues. Although they vary in amount, all four increased by at least 16 percent since 2005. However, none of these four unions saw a parallel rise in membership; in other words, they received more money, which had to be provided by fewer people.

The New England Healthcare Employees’ Union, which saw the smallest increase in revenue (the aforementioned 16 percent), actually lost members. The only one of these unions to gain a significant number of members (36 percent) more than doubled its revenue – a result that cannot be explained by membership growth alone. The scarce 6 percent in revenue lost by the fifth union, the Food and Commercial Workers, is dwarfed by the union’s loss of almost 30 percent of its dues-paying member base. The Food and Commercial Workers union, in contrast to the four other unions mentioned, is an exclusively private-sector union.

What Could Have Been:

Although fewer members would normally lead to less revenue, the unions increased dues to more than compensate.

Unions doubtless have good reason not to adopt progressive dues structures. When setting tax rates, Connecticut policymakers should be guided more by what the unions do than what they say.