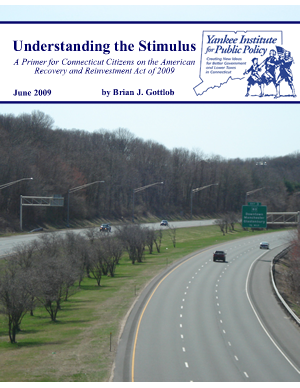 Published on June 24, 2009 by the Yankee Institute for Public Policy

The   report   highlights   economic   conditions  that  helped   propel          passage  of  the   stimulus   bill,   discusses   some  of  the   economic principles behind the use  of fiscal  policy  as  an  economic  stimulus     and presents key arguments for and against the ARRA.

The report broadly classifies and  summarizes  key ARRA provisions       and   their   timing   nationally  and  in  Connecticut.  To  help   bring coherence  to nearly  300  separate  spending measures we present a simple   taxonomy   that   describes   how  the  measures   will   affect government  and  their  potential to stimulate  economic activity. We compare the volume of known stimulus funding allocated to Connecticut with the amount allocated to other states and we estimate the value of individual and corporate tax breaks Connecticut citizens and businesses will receive as a result of ARRA’s provisions.

Finally, we suggest benchmark metrics from which to evaluate the job creation impacts of the ARRA and highlight some of the difficulties inherent in and urge caution in evaluating the employment impacts of the stimulus.