Annie Lamont’s firm was an early investor in Digital Currency Group, which recently announced its relocation to Connecticut 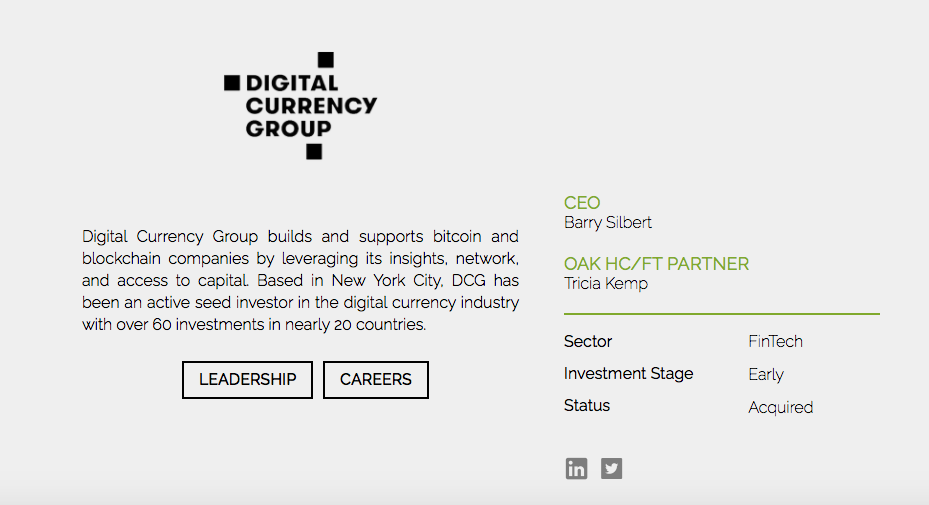 Gov. Ned Lamont announced yesterday that Digital Currency Group, a firm specializing in block chain currency, is relocating its headquarters from New York to Stamford, Connecticut with the help of $5 million in state incentives to grow jobs.

Digital Currency Group has a number of investors, among them Oak HC/FT, the venture capital firm run by Gov. Ned Lamont’s wife, Annie Lamont, which invested an undisclosed amount into DCG in 2015.

At the time Oak HC/FT tweeted that it was “Thrilled to be part of the leading & game-changing blockchain technologies w/@barrysilbert and @oakhcft.”

Oak HC/FT partner Patricia Kemp made the investment into DCG in 2015. The company is no longer listed as an active investment under Kemp’s portfolio and is listed as a prior investment, but there are still some ties between the two companies.

In 2021, DCG CEO Barry Silbert was a co-investor with Oak HC/FT and Kemp when the venture capital firm invested $445 million into Paxos in 2021, a blockchain infrastructure platform.

Now DCG has received a $5 million investment to relocate to Stamford and bring 300 jobs to Connecticut through the Department of Economic and Community Development.

Gov. Lamont has used his status and private sector background to foster business relationships between the state of Connecticut and big business, but not without controversy.

Lamont is already facing criticism for a state COVID-testing contract with Sema 4, another company in which Oak HC/FT had invested in, and which has received roughly $25 million in state funds for testing services.

The potential for conflicts of interest between Gov. Lamont and his wife’s investment firm were raised early into Lamont’s administration and the Office of State Ethics said that any contract that involved a company with which Annie Lamont’s firm had ties should have to submit a competitive bid like any other potential contractor.

According to the Office of State Ethics’ 2019 Advisory Opinion, “Governor Lamont, Mrs. Lamont, their immediate family and associated businesses are barred from entering into any State contracts ‘unless the contract has been awarded through an open and public process, including prior public offer and subsequent public disclosure of all proposals considered and the contract awarded.”

“Attracting new investment and job creation opportunities to Connecticut is a top priority for our administration and today’s announcement is another indication that we are seeing results,” Gov. Lamont said in a press release regarding DCG’s move to Stamford. “Digital Currency Group’s decision to relocate their headquarters here is the latest example of how Connecticut is the ideal location for leading-edge companies that are focused on business growth.”