On A Side Note: Is Connecticut playing the sucker? 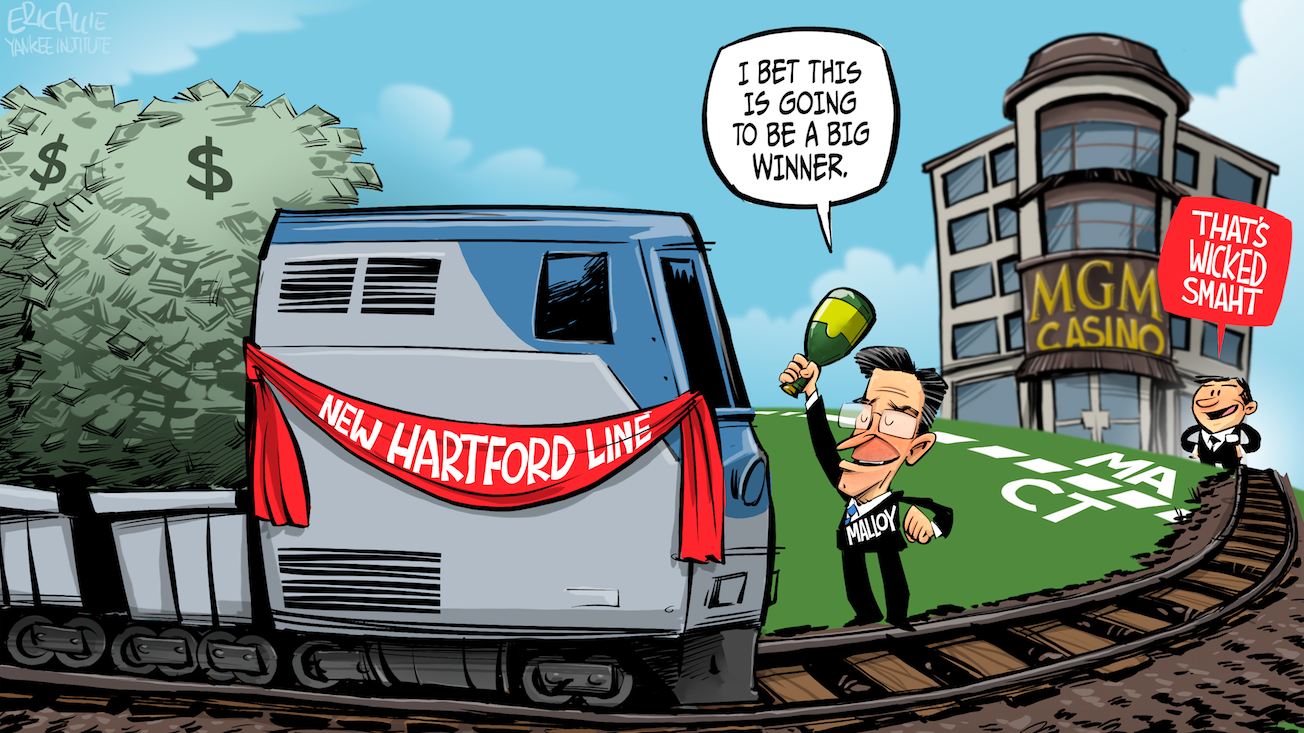 News that Connecticut is leasing 30 year -old rail cars from Massachusetts which no longer meet federal safety standards to use on its Hartford – Springfield rail line would be comical if Connecticut taxpayers weren’t footing the bill.

One can picture some bulky Bostonian wearing jeans, an undershirt, and an old Red Sox cap meeting with Connecticut DOT officials in an abandoned rail yard saying “Sure, buddy, I got some rail cahs for ya.”

The Massachusetts DOT didn’t consider the rail cars worth fixing, but after Connecticut fixes them up for $4.4 million and uses them for a little while, they will be returned to Massachusetts and Connecticut will supposedly buy brand new rail cars.

Connecticut is leasing and repairing the cars in an effort to have the New Haven/Hartford/Springfield line up and running by May, but right now it looks like Connecticut is getting railroaded.

Maybe its because Massachusetts has all those wicked smaht guys and girls at MIT and Harvard. They’re really good with numbers and statistics and game theory — particularly game theory, it would seem.

At the same time, Springfield was taking bids for a brand new casino, eventually picking MGM to construct a nearly $1 billion new gaming facility which will be completed this year — shortly after Connecticut begins running a dozen trains per day from Hartford right into Springfield.

As if it wasn’t easy enough to drive to Springfield, the new rail line will essentially be giving Connecticut’s capital-area residents an easy, readily available excuse to take their gaming across the border.

And here’s the real rub: The Mohegan Tribe signed off on the rail line as a concurring party.

Connecticut’s revenue from its two casinos has been falling in recent years, down nearly $160 million since 2007, according to the Connecticut Department of Consumer Protection.

The Tribes are having to compete with other states — namely Massachusetts — which are determined to develop their own casinos and gaming parlors.

Massachusetts currently has three major casinos in development. MGM Springfield is set to open this year and the Wynn Boston Harbor Resort is set to open in 2019. A casino in Taunton, MA appears to be stalled for now as it faces legal issues.

Massachusetts has become the Northeast’s economic powerhouse. Its economy is growing along with personal income, while Connecticut’s economic growth has been stagnant. The people of Massachusetts have money to spend and casino developers are looking to take full advantage.

A 2015 report by the Northeastern Gaming Research Project gave a troubling overview of Connecticut’s Mohegan Sun and Foxwoods Resorts, noting that casino revenue nosedived during the recession and the two resorts face increased competition. Fewer people are coming from Massachusetts and Rhode Island to Connecticut for the casinos to the tune of $600 million.

Couple the increased competition with the fact that Connecticut has yet to grow out of the 2008 recession and stakes are high for both the Tribes and the State of Connecticut, which enjoys getting 25 percent of casino slot revenue.

And this is where the real fun begins. Realizing they are building an inexpensive way for capital area residents to hit the slots at MGM Springfield, rather than make an 1 hour drive to Mohegan, lawmakers and the Tribes move to build a third casino.

Where are they going to put it? East Windsor, of course, right along the rail line and just before you get to Springfield. It’s both a shorter drive and a shorter train ride. In response, MGM began to court Bridgeport, tempting the struggling city with its own casino, which would really hurt Mohegan and Foxwoods.

The 2015 Gaming Report warned of the potential for casino over-saturation in the Northeast. Eventually, there won’t be enough gamblers to support all the casinos. Even if Connecticut builds a third casino, chances are it loses due to competition and a struggling economy.

So to recap, Connecticut is leasing old, broken rail cars and fixing them up so they can take Connecticut residents to the big, brand new casino in Springfield, which will severely impact Connecticut’s casinos, forcing Connecticut to build a new casino in East Windsor and fight with MGM over a Bridgeport casino.

In gambling, there’s a reason the House always wins. The long-term odds favor the House and the poor shlub pulling the slot lever or rolling the dice just can’t help themselves — they dream of the jackpot, while laying their last few dollars on the table.

Connecticut rolled the dice with a new rail line thinking it could win, but more and more it looks to be losing. The project cost hundreds of millions and will only carry a fraction of the commuters Metro-North does every day and will carry them straight to a competing casino. So Connecticut lays down the cards for a new casino, but the dealer is already showing twenty-one.

Connecticut is gambling for revenue and economic growth, but right now Massachusetts is the House: it has an ace up its sleeve, a growing economy and appears to be winning.