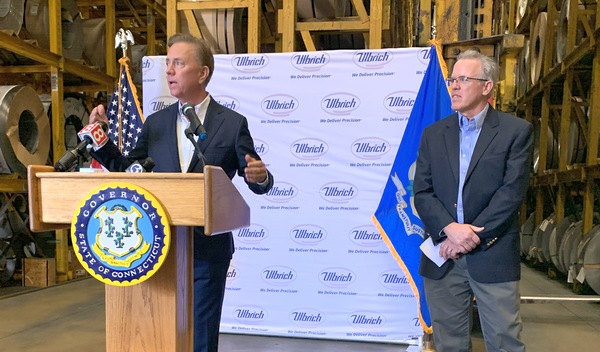 Connecticut’s first Chief Manufacturing Officer Colin Cooper announced that he is leaving the position after two years on the job. Cooper addressed his departure during a meeting of the Manufacturing Innovation Fund advisory board.

Cooper said that when he took the opportunity with the State of Connecticut, he made a two-year commitment. “I was literally a month away from my retirement and I got agreement by my wife to delay that to pursue this excellent adventure with the state. And it’s been a fascinating two years.”

Appointed to the position in 2019 by Gov. Ned Lamont and working under the Department of Economic and Community Development, Cooper was tasked with coordinating the private and public sector to grow Connecticut’s manufacturing base. Cooper earned $139,655 in total pay in 2020, according to comptroller’s Open Payroll website.

Cooper, a former CEO of the Whitcraft Group in South Windsor, said that he notified DECD Commissioner David Lehman of his plans to leave state service in the fall and is working with Lehman to help find a suitable replacement who has experience in Connecticut’s manufacturing industry as well as experience running a business.

“I want to get somebody in who has got some patience, because things don’t always move swiftly in state government, it can be diplomatic, network, work on consensus building. This position doesn’t have a staff, everything has to be done through the cooperation of others,” Cooper said.

“We identified probably about a dozen, dozen and a half candidates that we felt met that criteria, got a lot of input from people in and around the Connecticut manufacturing ecosystem that reached out, have had some great discussions with people,” Cooper said. “There’s no shortage of qualified candidates out there, what there is is a shortage of qualified candidates where this is the right time in their career to do this.”

“A lot of folks we talked to are actively engaged in running their business and the timing just isn’t right for them to disengage,” Cooper said, adding that they do have a “number of good candidates in the pipeline.”

Connecticut’s manufacturing industry has suffered over the last few decades, with Connecticut maintaining roughly half the manufacturing jobs that it did in 1990, according to the Department of Labor.

Manufacturing offers high paying jobs, but employers have regularly said they lack qualified applicants and have difficulty retaining workers. According to a 2021 poll by the Connecticut Business and Industry Association, 88 percent of polled manufacturers said they have difficulty finding and retaining talent.

According to CBIA, Connecticut’s manufacturing sector experienced one of its best years in 2020, where the industry generated $29.6 billion in gross domestic product in Connecticut, its highest level since 2015.

“We’ve all worked too hard over the last couple of years to make the progress that we have, I don’t want to fumble on the goal line here,” Cooper said. “I’m confident we can continue the momentum.”

“I’m not disappearing,” Cooper said. “I’m a Connecticut guy. I was born here, raised here, live here, I will continue to live here and will still be actively engaged with the manufacturing ecosystem.”

Connecticut manufacturers remain largely optimistic about the state and national economy, with 40 percent believing Connecticut’s economy will grow over the next year, according to CBIA.