Sen. Blumenthal on paying for bailout: “We will have to face the need to tighten our belts” 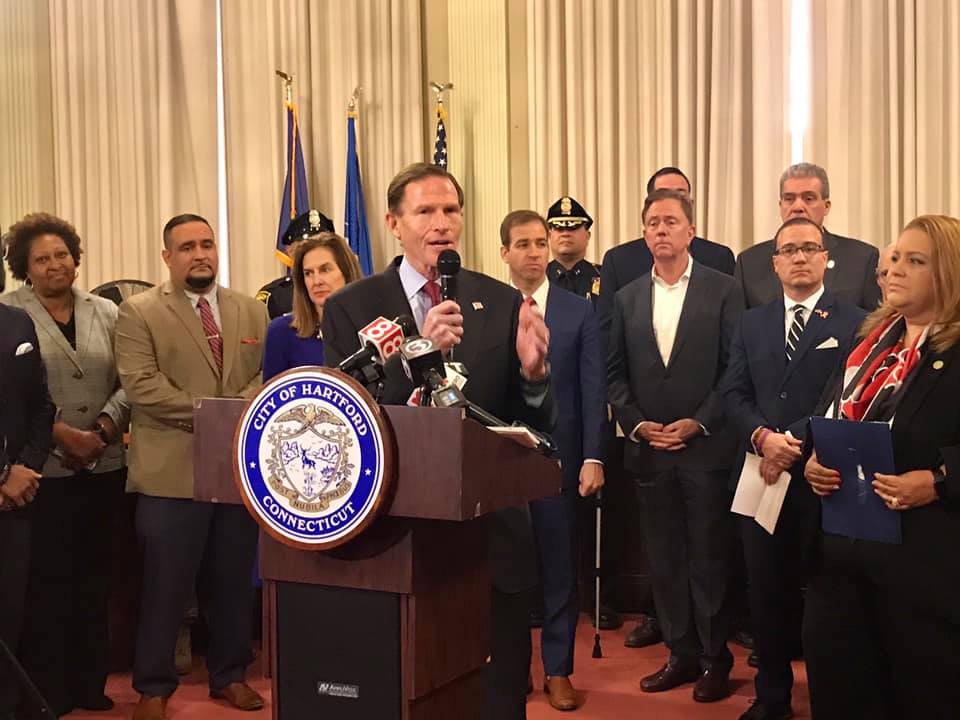 On an April 22 conference call with municipal leaders in the Capital Region Council of Governments, Connecticut Sen. Richard Blumenthal said “at some time, we will have to face the need to tighten our belts” in order to pay for $2 trillion in federal bailouts.

“We had a trillion-dollar tax cut,” Blumenthal said. “I have very strong views on the merits, or lack thereof, of that tax cut, which – in my personal view – benefited primarily the corporations. And some of them, by the way, are now asking for bailouts who used the benefits of those tax cuts to do stock buybacks and executive compensation.”

“What’s past is past, but the example of that trillion dollars is an example of what we cannot do in the future in tax cuts,” Blumenthal said. “There are profound questions here.”

Manchester General Manager Scott Shanley, who asked the question of Blumenthal, says it’s important that the country start to address the issue of how to pay for the bailouts now, rather than later.

“I think, like all of us, that what we have to do right now is attack the beast, the virus,” Shanley said. “But we’re giving ourselves a loan and we need to know how we’re going to pay it back.”

“I’m not opposed to raising taxes to deal with it, but I don’t want to kick the can down the road, so my grandchildren are stuck with this,” Shanley said. “At some point we have to true this up.”

Vernon Town Administrator and Risk Management Director Michael Purcaro was also on the call and said the time to start planning for a recovery is at the beginning of a crisis because the cost will eventually trickle down to local governments and taxpayers.

“This is well-established and fundamental principle demands that a comprehensive COVID-19 recovery plan must consider the long-term financial impact on government operations, the economy and the taxpayer,” Purcaro said. “All emergencies start and end at the local level.”

Blumenthal said that the cost of the bailouts is significant, but the cost of not doing anything is much greater for state and local governments as well as individuals and businesses.

“The best way to think about this government money is that it’s an investment, we can’t afford not to do it,” Blumenthal said.

But this round of federal bailouts in response to a recession may be different than in 2008 when the federal government propped up financial lenders by purchasing troubled assets and taking ownership stakes in companies.

As the market recovered, the federal government was able to sell off those assets and receive a return on stock purchases.

According to U.S. News & World Report, “In total, $623 billion in taxpayer money was dispersed via bailouts and roughly $698 billion has come back via dividend revenue, interest, fees and asset sales.” The government lost money on only two companies bailed out during the 2008 financial crisis.

Pro-Publica reported the federal government has realized $121 billion profit from the bailout as of March, 2020.

The CARES Act, however, may not see as much of a return on investment because the stimulus money has bee distributed across a wide array of private and government sectors in the form of grants.

According to NPR’s analysis of the stimulus package, $500 billion went to corporations while $1.47 trillion went to individuals, small businesses, governments, education and public health.

Passenger airlines, for instance, are receiving $25 billion in bailout money in the form of grants. Of those grants, only 30 percent will be in the form of debt to paid back to the government at 1 percent interest, according to Barron’s.

While the majority of these payouts are unlikely to yield investment returns to the federal government, the hope remains that propping up businesses that have been affected by the pandemic and individuals put out of work will keep the economy from falling further into recession.

“The cost of failing to make these commitments will be even greater,” Blumenthal said, adding that there another stimulus package is questionable. “I think we will have bipartisan support for the next package.”

The National Governor’s Association is pushing for an additional $500 billion to help states balance their budgets. Senate Leader Mitch McConnell appeared to shoot down that proposal by saying that it might be better to allow states to declare bankruptcy, which is not currently allowable by law.

“As government leaders we must prioritize and take a critical look at all areas of government to ensure that services are being delivered in the most cost effective and efficient manner, with the highest possible return on taxpayer investment,” Purcaro said.

Blumenthal said his primary concern at this point is to ensure oversight “to be sure that waste, fraud and favoritism are eliminated” from the bailouts and warned that a second wave of the COVID-19 virus could be coming in the winter.