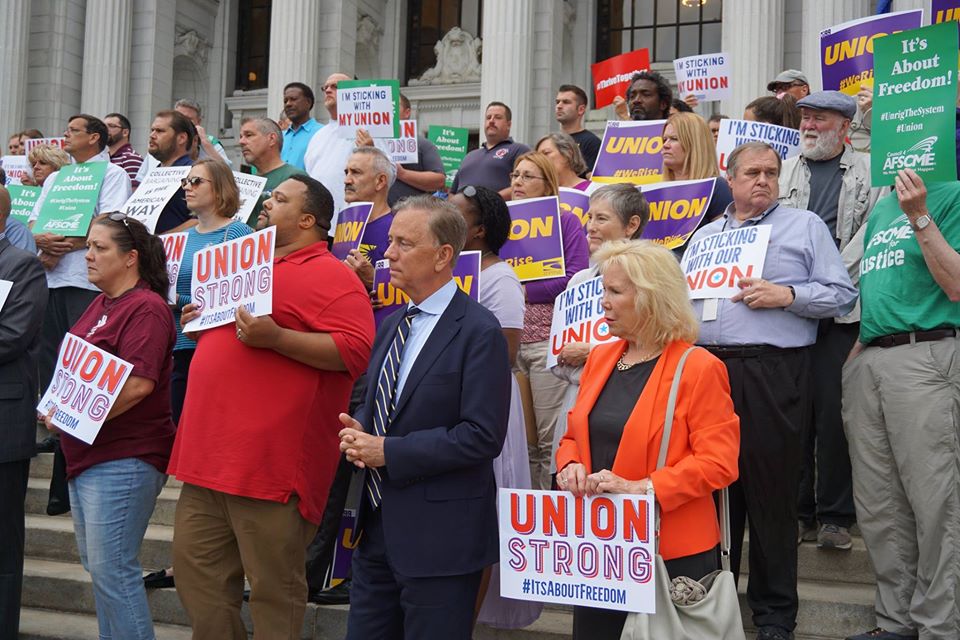 The Labor and Public Employees Committee approved a bill that would give public employee unions unfettered access to employees’ personal information and work orientations and would codify union membership cards into state law.

The legislation is seen as a push-back by labor unions against the Supreme Court’s 2018 ruling in Janus v. AFSCME, which said public employees could no longer be forced to pay union fees as a condition of employment under their First Amendment right to free speech.

The bill would provide Connecticut’s labor unions with employees’ personal contact information, allow union representatives to meet with new employees during their work orientations, use public facilities to conduct meetings and make dues authorizations in union membership cards a matter of state law, meaning that even if a worker resigned union membership he or she will still have to pay dues for a set period of time.

The bill would also not allow the state to share public employee information without outside organizations that might inform workers of their right to resign union membership.

Co-chair of the Labor Committee, Sen. Julie Kushner, D-Danbury, said the bill is a top priority when she spoke to a gathering of union members from the American Federation of Teachers CT, according to the Hartford Courant. Kushner was previously the Region 9A Director for the United Auto Workers.

The same bill passed in the House of Representatives in 2019 but was never taken up by the Senate. Now it appears as if the Senate is poised to push forward.

Senate President Pro-Tem Martin Looney, D-New Haven, testified in support of the bill during a public hearing, along with leaders of nearly every state employee union president or director.

“I am looking forward to working with the committee on SB 228 and HB 5270 which would ameliorate some of the damage done by the Janus decision of the United State Supreme Court,” Looney offered in written testimony. “While states are somewhat limited in how they can address this matter, I believe these bills offer a creative solution.”

What damage has been done to Connecticut’s public sector unions is questionable.

Similarly, Jan Hochadel, president of the American Federation of Teachers CT told the Journal Inquirer in 2018 that the decision has been a “blessing in disguise.”

Hochadel also testified in support of the bill, likening it to a Right to Work law for public sector employees. “By passing this piece of legislation, the Connecticut General Assembly would be taking a proactive step in limiting our exposure to the negative consequences of RTW for such a significant portion of our workforce.”

Roughly 94 percent of Connecticut’s full-time work force was part of a union in 2018, according to figures from the Office of the State Comptroller, and Connecticut’s public sector unions have continued to push for more growth.

During the 2019 legislative session, 603 more state workers were added into collective bargaining units and the General Assembly just passed an arbitrated agreement adding 100 supervisors in the Department of Children and Families to the unionized workforce at a cost of $1.2 million.

The supervisors were formerly classified as managers, but the state changed that classification to allow them to unionize.

The bill was opposed by municipal organizations like the Connecticut Conference of Municipalities and the Council of Small Towns, as well the CT Airport Authority.

“The proposed changes outlined in these bills represent a fundamental shift in functions and operations that have traditionally been the responsibility of management,” CCM wrote in their testimony. “They would infringe on the autonomy of municipal employers to efficiently manage their operations and employees. Additionally, these proposals would place municipal employers in precarious and potentially compromising positions.”

“Per [Federal law], lists of names or other identifying information that identify persons as having unescorted access to a secure area of an airport are not to be released,” Dillon wrote.

The bill was passed quietly in the committee meeting along a party-line vote with one comment from Rep. Craig Fishbein, R-Wallingford, offering his opposition.

“A lot of these issues that are addressed by this bill are those that are collectively bargained,” Fishbein said. “Either you believe in the process or you don’t. And I think it’s inappropriate for the state to step in on a contract other than its own, perhaps, say we’re going to take the ability to collectively bargain these items away from these parties.”

Connecticut’s public sector unions have been forced to settle some court cases involving the rights of employees to resign membership and not be forced to pay union dues or fees since the 2018 Janus decision.

A 2019 bill that would have mandated public employers to tell new employees of their Janus rights was not passed out of the Labor Committee.

The Labor Committee is currently comprised 13 members, six of whom are either current or former union officials.