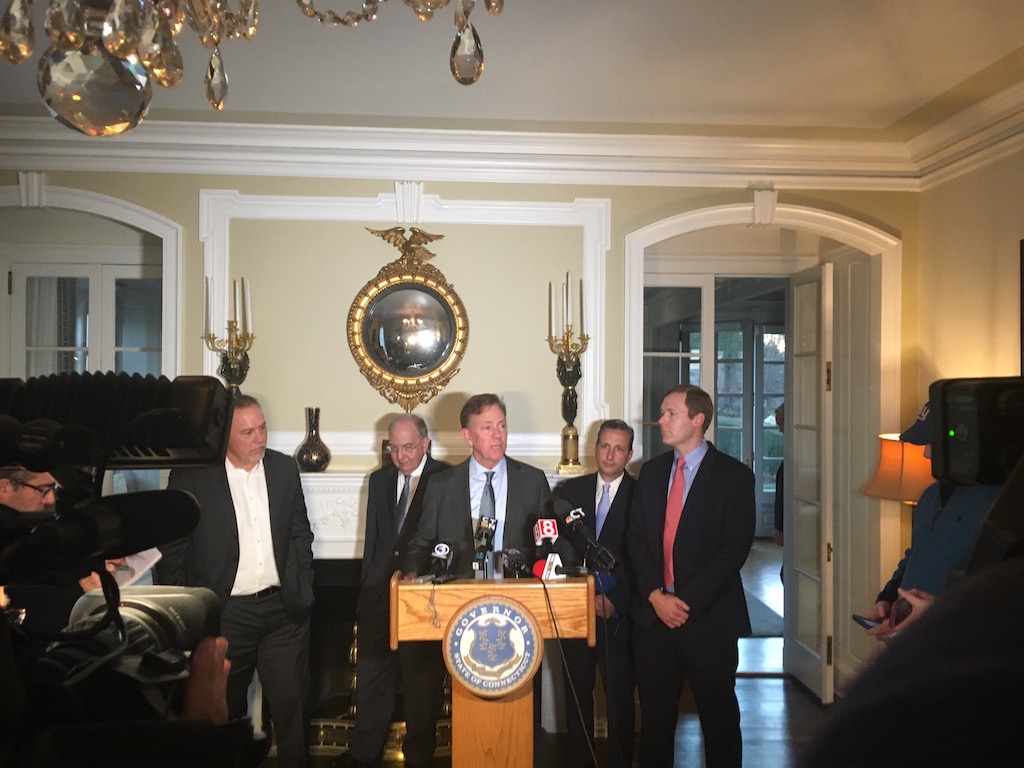 Protesters from No Tolls CT and a small group of union leaders gathered at opposite ends of the circular driveway to the governor’s mansion on Tuesday, while inside Gov. Ned Lamont and legislative leaders attempted to settle on a final transportation plan.

But no deal was struck with Republican leaders, who say they are firmly against tolls of any kind, leaving Lamont and the Democrats to go it alone on a new plan to toll only trucks.

“It is very difficult for Republicans to support a toll plan when there’s a no-tolls plan on the table,” Senate Republican Leader Len Fasano, R-North Haven, said during a press conference held inside the governor’s mansion. Fasano was referring to Senate Republicans’ FASTR CT plan, which doesn’t include tolls.

“The problem is [Democrats] are still stopped in their thought process on tolls,” said House Republican Leader Themis Klarides, R-Derby. “The structure of this state and of the Special Transportation Fund is faulty.”

But Lamont and Democratic leaders came out forcefully, saying they are all in agreement that tolling trucks is the next step in Connecticut’s ongoing debate over transportation funding.

“We’re ready to get this passed,” Lamont said. “We have a credible plan to fix [transportation funding] that doesn’t rely on raiding the Rainy Day Fund. Let’s start with trucks only.”

Speaker of the House Joe Aresimowicz, D-Berlin, said Democrats would be willing to offer assurances in the bill to guarantee that passenger vehicles would not be subject to tolls, up to and including a constitutional amendment.

Senate President Pro-Tem Martin Looney, D-New Haven, said, “We don’t want this to drag out into the 2020 session. The time to move is now.”

Democratic leaders said they still have to bring the plan to their respective caucuses to get them on board, and Aresimowicz said he will be meeting with his members over the next few weeks, but whether there will be enough time and enough enthusiasm among Democrats to call a special session before the holidays remains in question.

Although there are no details yet, under this revised plan, trucks would be tolled at key bridges throughout the state, generating upwards of $180 million per year in toll revenue – far less than the governor hoped for in his CT2030 plan.

The Rainy Day Fund would be left intact until its reserves reached 15 percent of the state budget; after that any funds normally directed to the Rainy Day Fund under the state’s volatility cap would pay down pension debt to relieve the burden of fringe benefits from the Special Transportation Fund. Democratic leaders also said they would require the Connecticut Department of Transportation to cut down on project costs by 10 percent.

Senate Republicans previously released their transportation plan called FASTR CT, which did not institute tolls, but rather took $1.5 billion from the Rainy Day Fund to pay down pension debt, saving the Special Transportation Fund upwards of $130 million per year.

Outside the governor’s mansion, Patrick Sasser of No Tolls CT said that truck-only tolls would quickly become tolls for cars.

“I think the governor and the Democratic Party have shown their hand, and basically what they’re looking to do is toll cars in the end,” Sasser said, referencing a radio interview Lamont gave in which the governor said he would start with tolling trucks.

“This is just their plan to get the gantries up and running, claim that it’s just trucks only, and, with a flip of the switch, they could be tolling cars the next day,” Sasser said.

The meeting was not without its political sniping afterwards, with Fasano challenging Democrats to pass their plan.

“If Democrats don’t want Republican ideas, if they’d rather tax people to death, they should vote on their plan now,” Fasano said in a press release. “Let’s be clear, this is the first incremental step to tolling cars… But if that’s what they want, they have the majority. Put it up for a vote.”

Lamont’s administration quickly responded with its own press release, accusing Fasano of taking “cheap political jabs” and walking away from the discussion because the Senate Republicans’ plan was rejected.

“Today it became abundantly clear that Governor Lamont, Senate Democrats, and House Democrats are the only ones looking out for our taxpayers’ best interests and the only ones with a plan that takes advantage of revenue from out-of-state trucks, keeps the middle class from being vulnerable during a recession, and moves our state responsibly forward,” said Lamont’s Director of Communications Max Reiss.

Rhode Island is currently litigating a court case filed by trucking companies against their truck-only tolls for bridges. Lamont referenced the lawsuit when he reversed his campaign pledge to toll only trucks and said truck-only tolls would not raise enough revenue.

Joseph Sculley of the Motor Transport Association of Connecticut cited the lawsuit in a press release.

“Bridge tolls on trucks only is exactly the basis of the industry’s lawsuit in Rhode Island,” Sculley said. “That case is still pending, with the latest action being that the State of Rhode Island was grilled in federal court. Does the State of Connecticut want to waste even more time and money on something that may not be legal?”