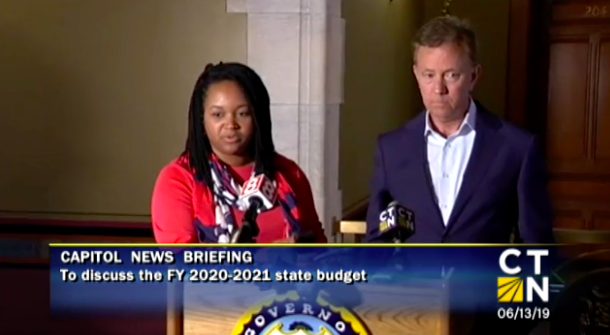 In response to Senate Republicans’ criticism that the 2019 budget assumes $450 million in pension and health care savings from state employees that have not yet been negotiated, Gov. Ned Lamont and his budget chief Melissa McCaw admitted that talks with labor leaders are just beginning.

“That process is just beginning,” McCaw told reporters. “It is not atypical to have a budget that incorporates these savings. These are not concessions or give-backs, so we don’t see that this will be problematic to achieve.”

“Now that we have a budget that incorporated those savings, the conversations will begin,” McCaw said.

McCaw cited a letter from Dan Livingston, chief negotiator for the State Employees Bargaining Agent Coalition, who said SEBAC has “indicated our willingness to consider ‘win-win’ changes, including the pension funding proposal indicated in the budget.”

The pension savings included in the 2019 budget involve restructuring payments for the unfunded state employee pension debt. The change would save $266.7 million in pension payments over the biennium.

If enacted, this would be the second reamortization of the SERS pension debt in two years.

Gov. Dannel Malloy stretched out pension debt payments until 2044 to prevent the annual costs from spiking. Even under the current payment schedule, annual SERS payments will grow to $2.2 billion by 2023.

The change outlined in the 2019 budget would essentially add $3.3 billion to the state’s pension debt payments in order to save approximately $164 million per year until 2032. Payment on the debt will be extended out until 2047.

Overall, it is approximately an additional $1.1 billion in costs to the state over the life of the payment schedule.

“Gov. Lamont and his budget chief today conceded that there is no deal with state employee unions to achieve the $450 million in savings in the budget bill,” Senate Republican Leader Len Fasano, R-North Haven, said in a press release. “The governor admitted that he has just begun to have conversations with state employee unions about this nearly half a billion dollars in supposed savings.”

An agreement to change the payments schedule of SERS pension debt would not require ratification or approval by union members, but it would require a memorandum of understanding with the State Employee Retirement Board and agreement from SEBAC’s governing board.

But 2017 pension reamortization negotiated by Malloy required approval by the General Assembly, but, thus far, Lamont has not conceded that this change may require a special-session vote by the legislature.

The legislature will already likely face two special sessions to pass a bonding bill and possibly a tolling bill.

The health care savings assumed in the 2019 budget amount to an additional $190.8 million over the next biennium and relies on savings from striking a deal with Connecticut’s hospitals to only charge a certain amount for medical services and possibly purchasing pharmaceuticals from Canada – neither of which have been negotiated yet.

The budget also stretches out teacher pension debt to prevent the annual payments from potentially growing to $6 billion per year. The budget uses lottery revenue to secure payments on a pension obligation bond the state took out in 2008.

Lamont has so far indicated that he will sign the budget into law despite the unrealized saving assumptions of $450 million.

Fasano said at a press conference that he believed signing the budget would violate the state constitution’s requirement for a balanced budget. Fasano speculated that some outside group might take court action against the budget if it is signed into law.

“So, we’re balancing a budget on a $450 million assumption?” Fasano asked in a press release. “That assumption represents a gigantic budget hole.”

It is unknown what, if anything, SEBAC or the State Employee Retirement Board will require from the governor or taxpayers in exchange for their willingness to restructure state employee pension debt again.

The 2017 SEBAC agreement negotiated by Malloy secured state employee retirement benefits until 2027 and awarded raises, cost of living increases, and lay-off protections for employees until 2021.