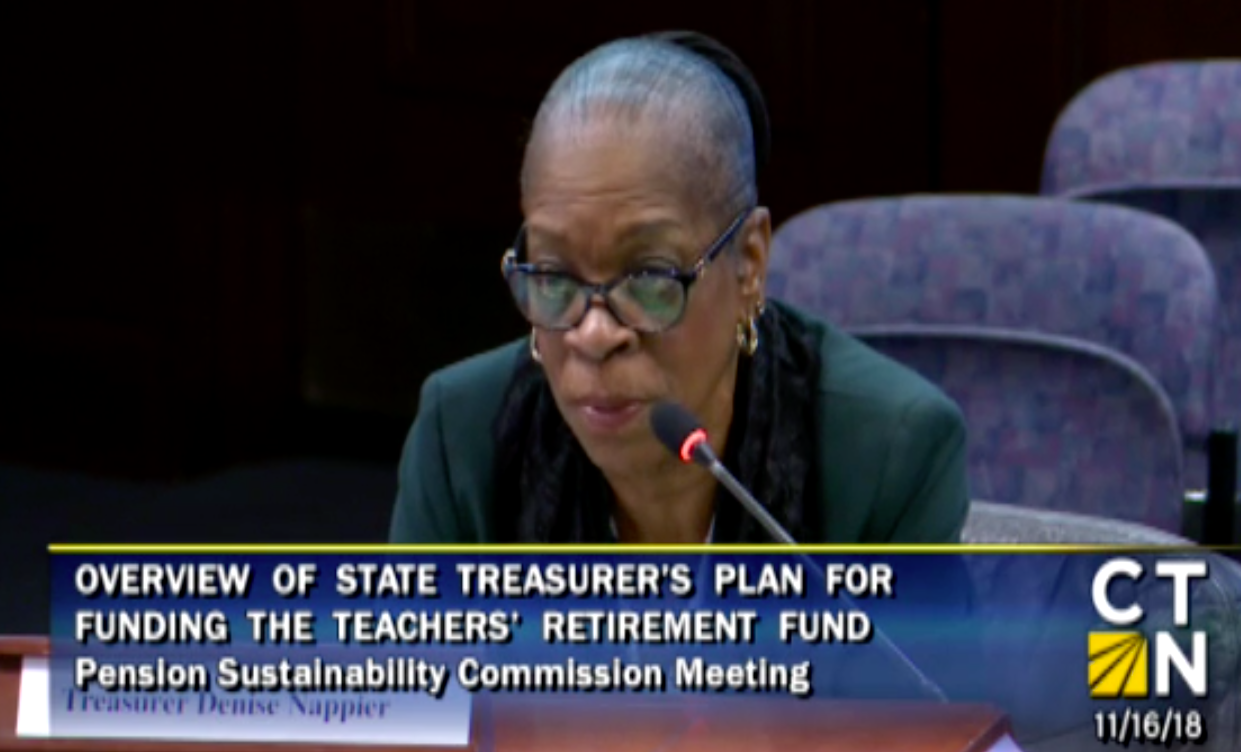 Nappier estimated the move would save Connecticut $441 million per year.

“From day one of my administration, I’ve called on governors and legislatures to meaningfully address the State’s commitment to responsible funding of pension obligations,” Nappier said in a press release. “Years of kicking the can down the road have deteriorated the health of the fund, and the State now finds itself in the midst of another fiscal storm.”

Nappier pointed out the state underfunded teacher pensions by $979 million between 1991 and 2005, and then took out a $2 billion pension obligation bond in 2008 in an effort to boost the pension fund.

“The Teachers’ Retirement System has had a funding problem for decades,” Nappier wrote in her presentation. “Today, despite repeated warnings, the bill has come due.”

That bill could be substantial. Although the Center for Retirement Studies at Boston College projected the state’s teacher pension payments could spike to $6 billion per year, Nappier says based on past trends, the cost will likely rise to $3.25 billion by 2032.

That figure is three times the amount the state currently pays toward the teacher pension system.

TRS is currently only 57.7 percent funded with $13 billion in unfunded liabilities, according to the Treasurer.

Part of the problem with TRS has to do with previous assumptions that TRS investments will return 8 percent, but the fund has only returned 7 percent on average.

The discrepancy between the assumed rate of return — known as a discount rate — and the actual returns means that even when the state is making its full annual required contribution, the state is still underfunding the system.

Nappier argued the discount rate should be reduced to 7.5 percent at first and then 7 percent over the long-term.

She also recommended paying off the pension obligation bonds in 2026 and then re-amortizing the debt – similar to what Gov. Dannel Malloy did with the State Employee Retirement System in 2017.

The re-amortization would lower the annual payment but also stretch out teacher pension debt payments over a longer period of time. The Treasurer’s Office estimated the savings to be $5.1 billion.

Gov. Malloy attempted to re-amortize the teacher pension bonds in 2018, but Nappier said that would violate the 2008 bond covenant and ruin Connecticut’s credit rating – which has already been lowered in recent years due to the state’s debt problems.

The Pension Sustainability Commission was formed to examine whether the state could sell or transfer state assets in order to help better fund the TRS. The Commission on Economic Growth and Fiscal Stability in 2018 recommended transferring the state lottery system to TRS.

The lottery system generates about $330 million annually, which is used to help fund Medicaid, the Department of Education, Libraries and Education Services and debt service.

Nappier did not seek re-election as State Treasurer in 2018 and will be replaced by Shawn Wooden, former President of the City Council of Hartford.