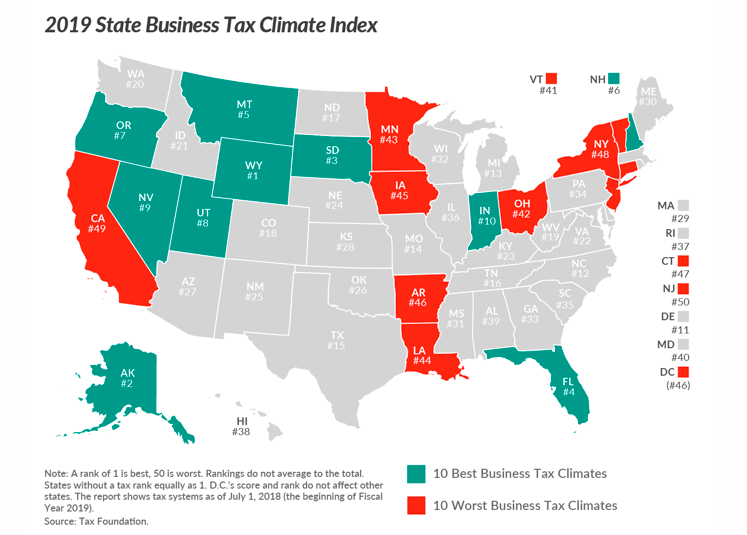 Connecticut was ranked 47th out of 50 states for its business tax climate, a drop from 44th last year, in the latest study from the Tax Foundation.

Connecticut slipped in the rankings because of new criteria the Tax Foundation is using, including changes based on revisions to federal tax law. Based on these new criteria, Connecticut would have been ranked 47th last year as well.

The state actually improved compared to other states in its corporate tax ranking because of a reduction this year in the corporate tax surcharge from 20 percent to 10 percent, reducing the top marginal rate. But Connecticut is now ranked 50th for its property tax burden, and 43rd for its income tax burden.

Connecticut is now one of only 13 states with an estate tax.

Connecticut’s poor showing in the business climate index comes at a time when the state is struggling to attract workers and businesses to Connecticut. The ranking is a reflection of the state’s volatile and complex tax system, as well as moderate to high tax rates across the board.

The study cites GE’s exit from Connecticut after the 2015 tax hikes as evidence that “taxes matter to businesses.”

New York and New Jersey also did poorly in the rankings – with New York ranked 48th and New Jersey 50th, although New Jersey got credit for recently eliminating its estate tax. The highest ranking state in the region was New Hampshire, which came in 6th place, while Vermont was ranked 41st, Maine 30th, Massachusetts 29th, and Rhode Island in 37th place.

The Tax Foundation bases its rankings on a state’s tax structure, rather than on how much or little businesses have to pay. States get higher marks for tax systems that include lower rates on a broader base, for systems with greater transparency, and for simplicity of compliance.