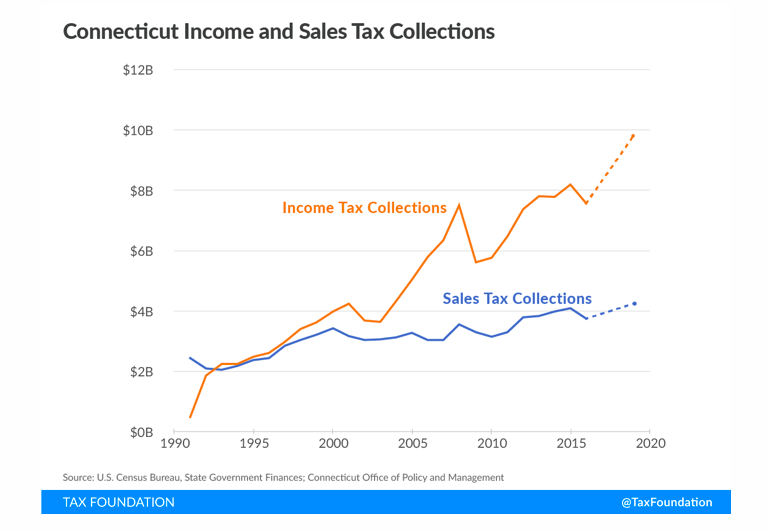 The Tax Foundation released a study of Connecticut’s tax structure in an effort to find out why people and businesses are fleeing the state.

Authored by Jared Walczak, the study runs the gamut of taxes in Connecticut, from the state income tax to Connecticut’s complicated corporate taxes.

Ultimately, Connecticut’s spending grew more than the income tax — and myriad of other taxes — could deliver in revenue.

“Had Connecticut’s budget merely kept pace with inflation, appropriations would stand at $13.67 billion. Instead, state spending burgeoned, driven in large part by an expanding individual income tax,” the study says. “Unfortunately for taxpayers, even this remarkable rate of revenue growth has proven incapable of keeping up with the demands of an ever-costlier state government.”

Connecticut’s corporate taxes occupied much of the study’s focus as the Tax Foundation tried to understand why major companies like General Electric and Alexion Pharmaceuticals decamped for cities like Boston.

The study notes that Connecticut’s surtax on the state’s largest corporations brings the corporate tax rate to 8.25 percent, which is high, but roughly in line with surrounding states.

It also means Connecticut gives up any tax corporate tax advantage it might otherwise have.

Connecticut does not allow businesses to carryback previous losses in order to smooth out their tax obligation and limits the number of years a business can carryforward to offset future payments.

While the federal government and surrounding states allow businesses the ability to pay in advance or carry over losses, Connecticut’s tax code imposes strict limitations which can hurt businesses, particularly those with cyclical revenue, according to the study.

The Tax Foundation notes that while sixteen other states have reduced their corporate taxes, Connecticut has instead relied upon tax incentives for companies, which it labels a “patch for an otherwise uncompetitive tax code.”

“Connecticut policymakers should explore paring back incentives in exchange for rate reductions or other structural reform,” the author writes.

Connecticut has increased corporate and business incentives throughout the Malloy administration with little tangible, economic result. Connecticut’s GDP has declined 1.6 percent during a time of while the state has been bonding hundreds of millions for low interest, forgivable loans and grants to companies.

Connecticut’s income tax revenue is tightly linked to the financial industry and Wall Street. Market fluctuations can cause big revenue swings and lead to larger than expected budget deficits.

Lastly, the study faulted Connecticut’s heavy property tax, noting that surrounding states like New York, Pennsylvania and New Hampshire have a competitive advantage because they do not have a tax on tangible property, which falls largely on businesses.

The author writes that eliminating the property tax for property valued less than $10,000 would eliminate the tax liability for 46 percent of taxpayers saving them time and administrative costs, while only reducing property tax revenue to the state by .014 percent.

“The costs of compliance and collections are far too high to justify collecting such a negligible amount of revenue,” Walczak writes.

The study concludes by noting that Connecticut’s dire fiscal and economic situation will require some kind of structural change in order to become more competitive and grow.

“There will be hard choices,” the study says. “But as the state’s finances falter and its people and businesses look for the exits, the status quo is no choice at all.”