Connecticut earned a “D” grade for its public-sector labor laws from the Commonwealth Foundation, a free-market think tank based in Pennsylvania.

Connecticut was one of 22 states in the country that earned a grade lower than a C. The study cited Connecticut’s binding arbitration laws, lack of paycheck protection and closed-door union contract negotiations as contributing to its poor grade.

According to the report “too few states mandate that union contract negotiations be open to the public, a tremendous oversight when personnel costs generally comprise the lion’s share of local and state budgets.” 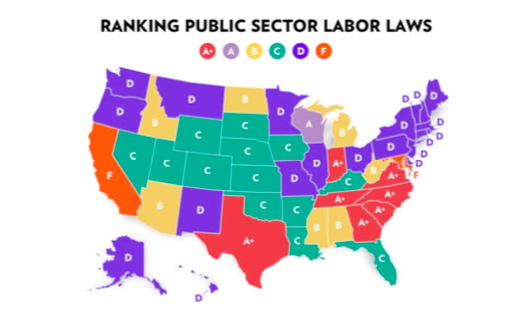 Public labor union contract negotiations in Connecticut are closed to the public and do not require a vote in the legislature in order to be passed. According to state statute, if lawmakers do not accept or reject the contract within 30 days it goes into effect automatically.

During the election campaign in October, a union-funded group came under fire from both Republicans and Democrats after it ran an advertisement against Republican candidate Dr. William Petit, claiming he was attacking “women and families.”

Dr. Petit was the sole survivor of a horrific home invasion in Cheshire in 2008.

The PAC – Labor United for Connecticut – was funded entirely by unions with the majority of its funds – $130,000 – coming from the Service Employees International Union, representing one of the largest groups of public employees in the state.

Connecticut government union members have two methods to opt out of paying for union political activities. A worker can become an “agency fee payer,” in which their dues are only for representation but not for any political activity. Members can also become conscientious objectors, in which case their dues money is sent to a charitable fund.

Commonwealth’s report noted that several states are taking action to limit the influence of public labor unions. In 2011 New Jersey placed a two percent cap on the amount an arbitrator can increase public employee pay. The cap reduced public employee raises through arbitration from 4.69 percent to 1.92 percent over three years.

In 2014 Colorado voters approved a ballot initiative to open teacher contract negotiations to the public, which the report dubbed “a triumph for government transparency.”

Seven states, including North and South Carolina, Texas and Virginia received a grade of A+.

Although labor union membership has declined, government still retains the largest share of union employees according to the U.S. Bureau of Labor Statistics. Six out of ten union members in Connecticut are employed in the public sector.