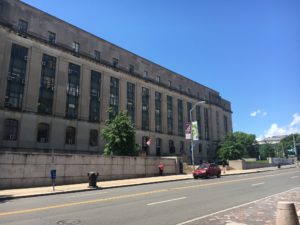 Connecticut cut $1 billion from its planned borrowing this year in response to lowered tax revenue but is still moving forward with a massive project to update the state office building at 165 Capitol Avenue. The bond commission approved a $181 million general obligation bond for “alterations, renovations and improvements, including installation of air conditioning,” to the building which was constructed in 1931 and is workplace for nearly 900 state employees.

Estimates for the cost of the project have ranged as high as $254 million and would involve moving all the employees and offices out of the building to a separate location while the work is being completed. The Hartford Courant noted that the price tag surpasses the costs of constructing an entirely new office building.

The upgrade costs are by far the largest bond authorization this year, more than double any other project.

Jeffrey Beckham, spokesman for the Department of Administrative Services which is overseeing the project, said “operating funds and capital funds are apples and oranges. A budget crisis does not mean we are shutting down state government. Core functions have to continue.”

Beckham says the renovation will save money by increasing the number of workers and offices in the building and making it more energy efficient. “The State Office Building will house some 2,000 employees who currently occupy expensive leased space.” 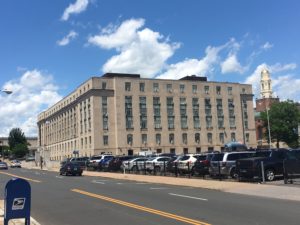 Among the projects and grants-in-aid that didn’t make the bonding cut was $4.5 million for repairs and alterations to group homes and residential facilities with the Department of Children and Families.

Private nonprofit companies working with the Department of Developmental Services also took a big hit with a cut of $4 million for group home repairs and improvements and $20 million for supportive housing.

Similarly, a grant-in-aid of $10 million was cut from low performing schools.

Connecticut bonds were downgraded in May by S&P Global Ratings and Fitch Ratings as investors grow increasingly nervous over the state’s continuing deficits and loss of revenue. The downgrade means investors will want higher interest rates in order to purchase the bonds.

The State Treasurer’s Office issued a warning in April that called for greatly reducing the number of projects to be paid for with state borrowing. “The only effective way to reduce expenditures on these projects would be for the State agency involved to halt those projects that have not begun, or can be stopped under contractual terms.”

Beckham indicated that the DAS is enthusiastic and ready to move ahead with this new project; “This renovation is a plan that began in 2013 and we are delighted to see this move ahead.”