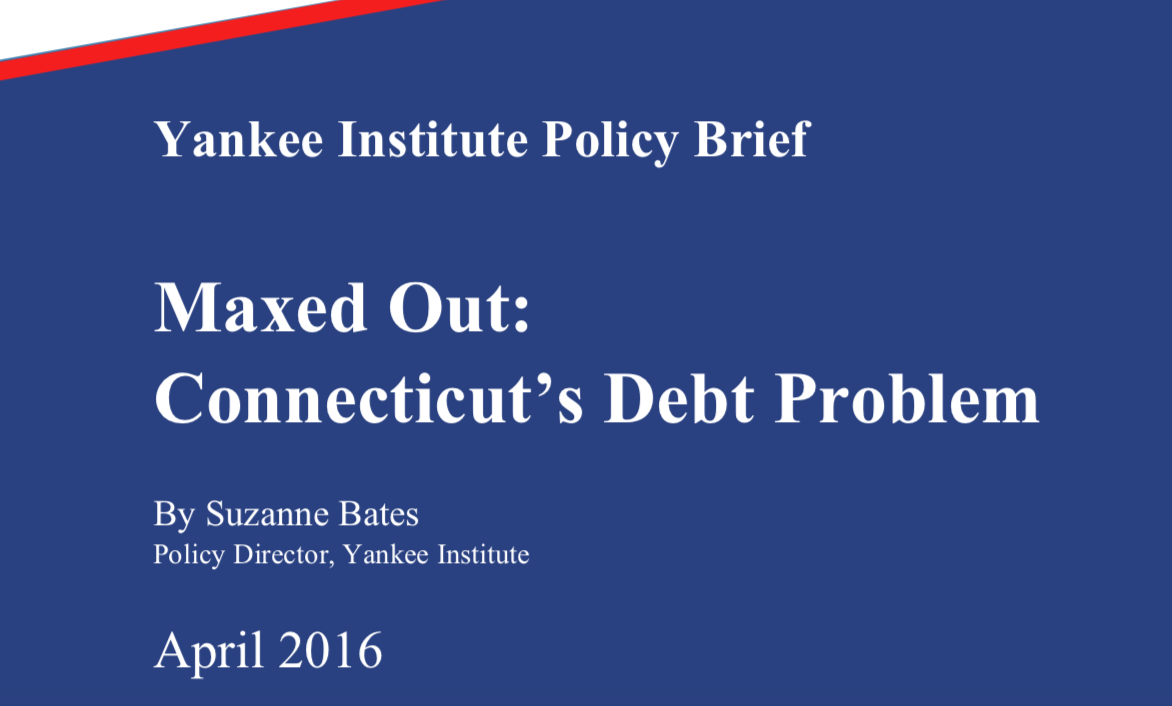 “If one wants to determine where the next global financial crisis will start,” a prominent economist recently wrote, “one might well be advised to follow the debt.”
Here in Connecticut, where we face a significant budget crisis, we would also be wise to “follow the debt.” Not only does our state face a significant burden because of its pension liabilities, the state is also weighed down by its bonded debt.

At $5,491 per person, Connecticut has the highest state debt per capita in the nation. When state and local debt are both taken into account, Connecticut ranks fourth highest in the nation. Any way you slice it, our debt is high, and it is weighing down our budget and our economic growth.

So what should we do about it? Other states have enacted measures to slow the rate of borrowing, and to impose additional checks on the power to bond. These policies include a yearly cap on bonded debt, a debt affordability analysis completed by a non-legislative panel, and long-term planning for capital improvement projects.

Connecticut could adopt any or all of these policies to improve the transparency and growth of its indebtedness. As debt service eats up a greater portion of the budget year after year, it is clear that something must be done.

Wearing Out the Credit Card

Gov. Dannel Malloy announced his intention to set a “soft” cap of $2.7 billion for the 2016 calendar year. This is a self-imposed cap, and so there are no consequences if it is not adhered to. Also, that amount does not include bonding for transportation projects; instead, it includes funds for school construction, repairs to state buildings, economic development assistance, and more. In 2012, the soft cap was set at $1.4 billion – so in just four years the “cap” has almost doubled.

Gov. Malloy was also warned late last year that the state was approaching its statutory debt limit. Lawmakers said they would find projects to remove from the authorization list in order to make more room for borrowing.
This notable increase in borrowing is affecting Connecticut’s total state debt. The state’s Comprehensive Annual Financial Report (CAFR) shows that by the end of 2015, the state carried $22.5 billion in long-term bonded debt. In 2008, the state had $16.2 billion in long-term bonded debt. This means that over seven years, Connecticut’s bonded debt increased by 39 percent — or more than 5 percent a year.

The rapid increase in bonded indebtedness is putting pressure on the state budget. Debt service payments went up 19 percent from 2015 to 2016, and are expected to increase by another 5 percent from 2016 to 2017. In 2017, debt service is projected to cost the state $2.2 billion – or more than 12 percent of all General Fund expenditures.

Besides increasing overall indebtedness, Connecticut lawmakers have also adopted the risky practice of depositing bond premiums in the state’s General Fund. State Treasurer Denise Nappier has spoken out against this practice.
Connecticut, like many other states, sells its bonds at a “premium,” or at a higher interest rate than could otherwise be secured. In return, the underwriter of the bonds makes a one-time payment to the state to offset the cost of the higher interest payments. Selling bonds at a premium is the opposite of paying points on a mortgage. Instead of the borrower paying a lump sum up-front to reduce future interest rates, the lender pays a lump sum up-front to increase future interest payments.

Other states usually use these “premium” payments to fund capital projects, which should reduce the amount of bonds the state has to sell. In Connecticut, however, the premiums are deposited in the General Fund, and become part of the state’s day-to-day spending. Gov. Malloy’s budgets now rely on the bond premium payments, assuming that the state will achieve a certain level of payments year to year, and those numbers are factored into the state’s revenues.

In a letter to lawmakers, Nappier said this practice could lead to shortfalls in the state’s debt service account, which could further harm the state’s reputation.

The state’s risky behavior regarding bond premiums, its overall indebtedness, and the continued precariousness of the state’s budget, have led three of the four rating agencies to place a negative outlook on the state’s credit rating. In a statement, Moody’s expressed concern about the state’s high fixed costs relative to its demographic shifts, which have led to shrinking state revenues.

There are real consequences associated with the rating changes – they could lead to higher interest payments on the state’s debt. The ‘negative outlook’ rating also has psychological consequences that cannot be underestimated. Connecticut’s economy has struggled for years to recover both from the 2008 recession, and also from the blow caused by the two highest tax increases in state history, which were imposed in quick succession.

As confidence in the economy erodes, it becomes even more difficult to achieve the economic growth that is necessary to stabilize the state’s finances.

Along with its long-term indebtedness, Connecticut also carries the weight of significant unfunded liabilities in its State Employees’ Retirement Fund, its Teachers’ Retirement Fund, and in Other Post Employment Benefits (“OPEB”) (primarily retiree health care). Pension and OPEB debt payments are rapidly increasing year over year, at the same time that debt service payments are also rising. This locks more of the state’s tax revenues into paying for fixed costs in the budget, which squeezes out spending on other priorities, including education, healthcare, and services for children and the disabled.

Are We Bonding for the Right Things?

Given the already high level of indebtedness, state lawmakers should be especially careful about setting priorities for bonding. Connecticut cannot afford to borrow money for anything but necessities at this point.

However, a review of recent bond authorizations shows that lawmakers continue to approve projects that are difficult to describe as “necessities.” At the March 24 meeting, state officials and lawmakers authorized $6 million for ‘transit-oriented development’ — which the private sector is already well equipped to pursue. Another $4.5 million was borrowed to entice Aer Lingus to fly from Bradley International Airport to Dublin, Ireland. Along with these projects, lawmakers approved another $35.4 million for other economic development incentives.

The list of projects highlights the reason that cutting back on borrowing money is so politically difficult – each of these projects represents a stakeholder who has an interest in seeing that the money is secured one way or another. And each project, in and of itself, may even have some merit. Over the next few years, as state lawmakers cut the budget by hundreds of millions – and potentially billions – of dollars, these stakeholders will put increasing pressure on lawmakers to shift even more operational spending into borrowing. This would be unwise, as it would just exacerbate the state’s problem with fixed costs.

In the state treasurer’s most recent Certificate of Indebtedness, issued on Jan. 29, the first item listed as part of the calculation was the amount of authorized bonded debt that still has not been issued. That amount stands at $6.5 billion. Given that the state plans to issue only $2.7 billion in bonds this year, that amount represents more than two full years of debt issuance.

The authorized list includes projects for which the state has promised to borrow money. As the bond commission and the legislature continue to authorize additional bonding, that number may grow.

What Should Connecticut Lawmakers Do?

Current law limits the total amount of state debt to 1.6 times the General Fund revenues for the year. However, much like the spending cap, a close reading of the debt cap law reveals that the legislature has selectively moved borrowing out from under the cap several times in order to increase borrowing capacity.

With the exception of specifically-excluded projects, Connecticut’s current cap is on total bonded debt. Other states have adopted hard annual caps on borrowing. Several bills introduced in the 2016 legislative session suggested hard caps – from $1.5 billion a year up to $1.8 billion a year. As of this writing, none had been brought up for a public hearing or a vote.

Other policy options include issuing a yearly Debt Affordability Study or a Debt Management Plan. The latter has the added benefit of taking into account future capital needs, and would include planning to determine how to meet those needs while also managing overall indebtedness. Maryland, for example, has a Capital Debt Affordability Committee. This entity submits a report to the governor and General Assembly that recommends a “prudent” amount of state borrowing for each fiscal year. While Connecticut does have a Bonding Commission, this body meets primarily to approve or reject funding requests submitted by the governor.

Lawmakers could also choose to set a hard annual cap on increases in debt service costs. This way the state could increase borrowing in years when interest rates were low, but would have to reduce borrowing when the costs are higher.

To increase transparency, state officials should also simplify and consolidate the way they communicate how much indebtedness the state carries, and the cost of that debt. Currently, state debt is reported on various balance sheets and rarely appears all in one place. This is true of debt service payments as well, which are spread across several documents. This simplification would allow for wiser decision-making.

State lawmakers must take action to ensure that Connecticut’s capacity to borrow isn’t maxed out when critical infrastructure projects require funding. They have options to choose from when it comes to managing the state’s debt. Let’s do something before it’s too late.

**For citations, charts and graphs, please download the PDF**